Reed leads after first round concludes at Doral 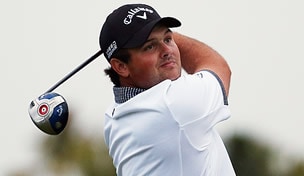 With a 4-under 68 in the opening round of the WGC-Cadillac Championship, Reed took a one-stroke lead over a half-dozen others at windblown Trump National Doral.

“Yesterday I just didn't get myself into trouble; I felt like I hit a lot of good shots, hit a lot of greens, and I was making some good putts,” said Reed, who along with 62 other players in the 68-man field completed his first round Friday morning after a storm caused a Thursday afternoon delay. “Today just seemed I started off with a really solid 4‑iron to 3 feet on the par-3, (No.) 5, which jump‑started the round. It's playing tough out there. Just got to keep doing what I'm doing, make some putts and hit solid shots.”

Reed, who won the Humana Challenge two months ago, posted six birdies in the round against just a pair of bogeys.

Just one stroke further back is a sixsome of proven veterans. Jason Dufner, Dustin Johnson, Matt Kuchar, Harris English, Francesco Molinari and Hunter Mahan each posted scores of 3-under 69.

Rory McIlroy, just days removed from losing the Honda Classic in a four-man playoff, is among a group two strokes back. He posted a first round-best seven birdies during a whirlwind 2-under 70 round that also included five bogeys.

“I realize I have to stay patient,” he said. “Just a matter of sort of managing your emotions and your expectations and your anxiousness and just trying to put all your energy into the round of golf that you play and know that four rounds of good golf are going to add up to maybe a win.”

Defending champion Tiger Woods is mired in a share of 53rd place after carding a 4-over 76. Woods was 2 over through 10 holes when play was suspended on Thursday, then returned Friday morning to post bogey-par-bogey-double before capturing three consecutive birdies and ending with a final bogey.

It was Woods’ worst score at Doral in his lengthy career here, which includes four victories.