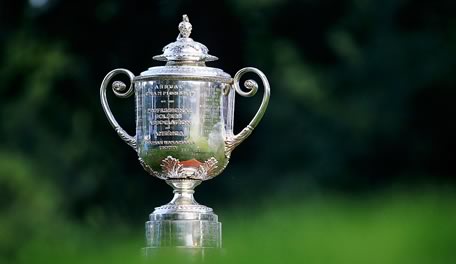 Oak Hill Country Club in Pittsford, N.Y., will host the 2023 PGA Championship, according to a Democrat and Chronicle report.

The report cites multiple sources that indicate a board meeting to discuss the matter was held at the club earlier this week, and that the Donald Ross design will soon be announced as a PGA host site for the fourth time.

The season's final major was held at Oak Hill two years ago, when Jason Dufner held off Jim Furyk for his first major victory. It also hosted the PGA in 1980 and 2003, when Jack Nicklaus and Shaun Micheel hoisted the Wanamaker Trophy, respectively.

The course has also hosted the U.S. Open (1989) and U.S. Amateur (1998), but the report indicates that Oak Hill could become one of the PGA of America's "core rotation venues" for the PGA Championship, meaning it could potentially host the event every seven or eight years.

A relationship with the PGA of America also brings into play the possibility of hosting the KPMG Women's PGA Championship, which replaced the LPGA Championship that was held for years in nearby Rochester.

Host sites for the PGA Championship are currently slated for the next seven years, including Trump Bedminster in 2022, which the PGA reiterated is "still scheduled" despite its decision to move this year's Grand Slam of Golf away from another Trump property. Other future host sites include Baltusrol (2016), Quail Hollow (2017), Bellerive (2018), Bethpage Black (2019), TPC Harding Park (2020) and Kiawah Island (2021).