Report: Woods has bulging disk in back 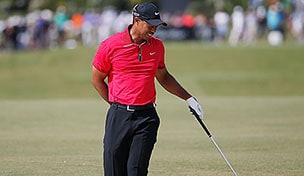 ORLANDO, Fla. - Tiger Woods is reportedly suffering from a bulging disk in his back, though his agent, Mark Steinberg, told GolfChannel.com that there is “nothing new to report since Tuesday,” when Woods withdrew from the Arnold Palmer Invitational.

Golfweek magazine, citing a source with knowledge of Woods’ condition, reported on Thursday that the world No. 1 has a bulging disk but it would not require surgery and that it could have been much worse.

“Nothing new to report since Tuesday,” Steinberg said in an email to GolfChannel.com. “Tiger is resting and receiving treatment. We will evaluate in the coming days.”

When Woods was asked at Doral whether the injury was more serious than back spasms, he said: “Well, it is back spasms, so we’ve done all the protocols and it’s just a matter of keeping everything aligned so I don’t go into that.”

This is just the second time in Woods’ career that he has skipped the Arnold Palmer Invitational, where has won eight times, including each of the past two years. In a statement Tuesday, he said that the pain from the back spasms has yet to subside, and that it was “too early to know about the Masters.”