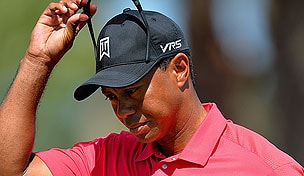 Getty Images
SAN DIEGO, CA - FEBRUARY 01: Course workers clear a fallen tree from the 15th fairway before play resumes during the final round of the Farmers Insurance Open at Torrey Pines South on February 1, 2016 in San Diego, California. Play was suspended Sunday due to inclement weather. (Photo by Sean M. Haffey/Getty Images)  -

DORAL, Fla. – Tiger Woods, who is scheduled to speak with the media today at 1 p.m. ET at Doral, will likely play this week’s WGC-Cadillac Championship, according to his manager.

Woods’ manager Mark Steinberg told ESPN.com that he will tee off on Thursday. “(He) wouldn't be coming down if he didn't intend to compete at (the) highest level,” Steinberg said in the report.

Woods withdrew after 13 holes on Sunday at the Honda Classic with an ailing back and was unsure of his status for this week’s World Golf Championship, where he is the defending champion, when he left PGA National.

“It's too early to tell. I need treatment every day until Thursday to try and calm it down. We'll see how it is,” Woods said in a statement.