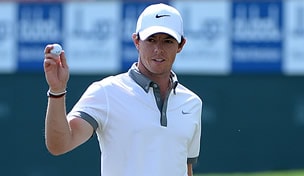 Getty Images
“My son Jackie was about 6 years old, and somebody asked him what does your dad do and he said, ‘Nothing, he just plays golf,’ … I did play golf. I played the greatest game of all. … For millions of people, golf does so much more. The game of golf has given more back to charity than all of the major sports combined … Yes, Jackie, I just play golf. But my whole life work was to make you all proud of me. Hopefully I have.” – during his acceptance speech for the Congressional Gold Medal  -

The bracket for the WGC-Accenture Match Play Championship was unveiled late Sunday night. Here are some thoughts after perusing the four regions:

• How was Jimmy Walker rewarded for winning three of his first eight starts? By drawing a potential second-round date with Ian Poulter, with Sergio Garcia looming after that. Good prep for the Ryder Cup, we suppose.

• There is a chance for pyrotechnics in the bottom half of the Snead Bracket: Bubba Watson, Keegan Bradley and Dustin Johnson could all square off by the Round of 16. (Of course, DJ will have to get there first. In five career starts in this event, he has been eliminated in Round 1 four times.) Any golf fan should want to see Bubba and DJ go head-to-head.

• It seemed like a no-brainer to pencil in Hunter Mahan for the semifinals. After all, he won this event in 2012 and lost in the finals a year ago. But potentially looming in the Round of 32 is Zach Johnson, who in his last four worldwide starts has not finished worse than eighth. Johnson, however, has lost in the first round each of the past three years, and five of the last seven.

• Defending champion Matt Kuchar would seem to have an easier path to the semifinals than most, assuming, potentially, that he can skirt past Jordan Spieth in the Round of 16. Kuchar, coming off his first missed cut in more than a year, has reached the quarterfinals each of the past three years.

• Steve Stricker hasn’t played since the World Challenge in December. Last year, he snuck in only an appearance at Kapalua before he showed up at the Match Play, then reached the quarterfinals of the event. In Round 1 he’ll face George Coetzee, who won two weeks ago on the European Tour.

• The top seeds could be in trouble early. No. 1 overall seed Henrik Stenson has four consecutive first-round exits, while Zach Johnson has been bounced early in three straight years. Rory McIlroy was sent packing in Round 1 last year, but he reached the finals in 2012. In the last four years, Justin Rose has mixed two second-round exits with a pair of first-round flameouts.