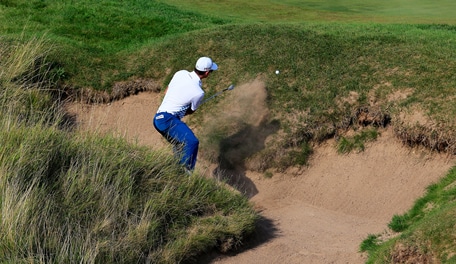 SHEBOYGAN, Wis. – Justin Rose was trying to mount a back-nine charge Sunday at Whistling Straits, but he was undone by an untimely double bogey.

Rose was at 16 under, having missed a good chance at the 12th to get within one of Jason Day’s lead, when disaster struck at the par-4 13th.

After driving into the left rough on the 404-yard hole, Rose hit his approach shot into the left greenside bunker. He failed to reach the green with his third shot, chipped on with his fourth, missed a 10-foot putt for bogey and tapped in for a 6.

“The double bogey on 13 took the wind out of my sails,” Rose said. “That's the thing about this golf course, there's birdies to be had, but if you get in the wrong spot, you can get up a double real quick and unfortunately that's what happened to me on 13.”

Rose dropped to 14 under, five back after Day birdied the 11th. He finished on the that number with a closing 2-under 70.

“I played well, just more evidence that my game is there, and ready to compete again and win a major championship,” the 2013 U.S. Open champion said. “So you take confidence from it.”