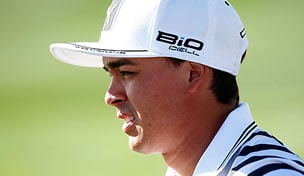 Getty Images
Captain Jay Haas of the United States team shakes hands with Nick Price of the International team during the opening ceremony of the 2015 Presidents Cup at the Convensia ceremony hall on October 7, 2015 in Incheon City, South Korea. (Photo by Chung Sung-Jun/Getty Images)  -

This could be the most hotly contested Ryder Cup ever – and we’re talking about just making the team.

So, each Monday, GolfChannel.com will take a way-too-early look at the players who are vying for one of the 12 spots on the team. Nine players make the squad via their respective points list, and both captain Tom Watson and Paul McGinley will have three wild-card picks apiece.

• Only one player moved into the top 12 after the first WGC of the calendar year: Jordan Spieth. The 20-year-old again showed off his match-play prowess, advancing to the quarterfinals in his first and only tour around Dove Mountain. That seems to bode well for his Ryder Cup prospects, along with the fact that he is a two-time U.S. Junior champion (match-play event), he earned the most points during the 2011 Walker Cup (match-play event), and he is, you know, the reigning PGA Tour Rookie of the Year with three top 10s already in his sophomore campaign.

• Fellow Match Play quarterfinalist Jim Furyk moved from 19th to 14th on the list. Last year, the 43-year-old was left off the Presidents Cup team, marking the first time that the veteran has missed a team competition since 1997.

• Rickie Fowler, a member of the last U.S. Ryder Cup team that headed overseas, made a huge jump in the rankings with his third-place finish in the Arizona desert. He moved from No. 53 to No. 20.

• Victor Dubuisson was already a safe bet for the team, entering last week at No. 2 in points. Now, he’s a virtual lock. His star-making performance at Dove Mountain means there will be one less spot on the team come September.

• Justin Rose made his second start of the season at the Match Play, losing in the Round of 32. It still was enough for him to creep inside the top 10 on the World Points List.

• Sergio Garcia may have baffled observers with his bizarre concession during his third-round match against Fowler, but the Spaniard’s good form has clearly continued. He has two wins in his last four starts and figures to be a factor in the upcoming events, including the Masters.