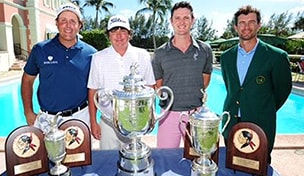 Getty Images
It’s not as celebrated as, say, the 1986 Masters, but what Jack Nicklaus did in the 1978 Jackie Gleason-Inverrary Classic was masterful nevertheless. The Golden Bear birdied the last five holes to edge Grier Jones by one shot. Nicklaus’ remarkable run included two chip-ins – one from 80 feet – and three birdie putts. Tied with Jones on the 18th hole, Nicklaus stuck a 9-iron to within 5 feet, then made the winning putt after Jones missed his 15-foot birdie attempt. “The man's amazing,'' marveled Hale Irwin, who finished two shots back. “He birdied No. 16, walked across water to No. 17 and teed it up.”  -

JUNO BEACH, Fla. – Rory Sabbatini, paired with amateur Hugh Kenworthy, won the gross division of the Seminole Member-Pro in a match of cards with Roberto Castro and Russell Ball, who claimed the net division title with a 59.

Sabbatini and Kenworthy carded a 61 in the annual event that draws some of the game’s top PGA Tour professionals, including all four major champions from 2013 (Adam Scott, Justin Rose, Phil Mickelson and Jason Dufner) in the same field for the first time this year.

Rory McIlroy, one day removed from a playoff loss at the Honda Classic, finished tied for 27th paired with John Pinkham, while Ernie Els and Rickie Fowler were in a group tied for ninth in the gross division.