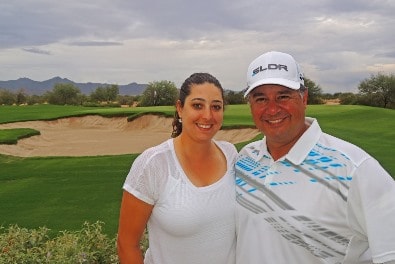 SCOTTSDALE, Ariz. -- Four years ago, Rafael Rodriguez and Heather Taher were at the U.S. Open together at Pebble Beach, taking in the action on the famous, oceanside par-5 sixth and par-3 seventh holes there during Saturday's third round. Taher knew her boyfriend played golf, but being there between those two great holes sealed the deal for her. The time was right for her to take up the game.

"I watched them hit balls all day long and thought, 'This is a sport I want to try," recalled Taher.

She did more than try; she caught the bug. And apparently, she has a knack for it as well. In the past year, Taher, an emergency room physician from San Jose, Calif., has lowered her handicap from 27 to 14. Her improvement has been so dramatic that she has moved up two flights since she won a Golf Channel Am Tour local event at Pasatiempo Golf Club in Santa Cruz, Calif., last November.

Rodriguez has improved as well. Last year, he won the National Championship in the Sarazen flight (12-15.9 - handicap) at PGA West in La Quinta, Calif., and got bumped up to the Hogan Flight (8-11.9 handicap), where he has two second-place Am Tour finishes this year.

Most importantly, though, the two have grown their golf games together.

"I think it's just great quality time together," said Rodriguez, a software developer for Oracle. "I have a lot of friends who don't have their significant others playing with them. We get along great. She's very athletic and competitive. It's been a great mix. We've played more together than anyone thought we would."

One reason for Taher's rapid improvement has been the lessons she has taken from Brent Welsh, a GolfTec instructor at Golfsmith in San Jose. She also likes to practice. Rodriguez has also taken instruction from Welsh, who has even accompanied both of them on playing lessons at a local course.

"She'd definitely had more instruction from him than I have, but when I'm having issues I go to him," Rodriguez said.

Golf, and more specifically, golf on the Am Tour, has also afforded them a chance to make friends with like-minded couples. Already, they've played Pebble Beach with another couple from Seattle they met on the Am Tour and they've visited each other several times.

"We get along well," Taher said. "He's been very patient throughout the last few years. When we go out, we have fun and we bring other people into it."

"This has been great," Rodriguez said. "It's provided us with common friends with common interests. That's hard to do."

On Tuesday, they played 11 miles from one another during the Am Tour National's first round. Taher played at Grayhawk Golf Club and Rodriguez played his first round at Talking Stick Golf Club. A few bad holes in the rain led to a 95 for Taher.

"I hit a tee shot, and the ball went 100 yards, and the club went 50 yards because it slipped out of my hand," she said.

Rodriguez shot 81 on the North Course at Talking Stick, where it only sprinkled at the end. It left him in a tie for 38th after Day 1.

As of yet, though, they've never played competitive golf as a two-person team. It's something they would eventually like to do.

"I think we'd do well," Taher said. "We have different strengths. I'm a good driver and pretty long for a girl – about 240 on a good day. And I can putt pretty well… And his iron game is amazing."