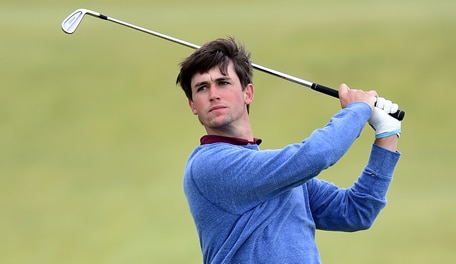 ST. ANDREWS, Scotland – Ollie Schniederjans birdied the final hole at St. Andrews in his last start as an amateur to cap a 5-under 67 that vaulted him into the top 15 (for now) at the Open Championship. In other words, it was just about the perfect way for the former world No. 1 to declare that, yes, he’s ready to take the next step.

“Amazing final day,” he said Monday. “Couldn’t ask for anything more special, feeling like I belonged out here and watching my name go up the leaderboard.”

Schniederjans, who earned his spot in the field after winning the McCormack Medal last year as the No. 1 amateur in the world, will make his pro debut at next week’s RBC Canadian Open.

The 22-year-old will also receive sponsor exemptions into the Quicken Loans National, Barracuda Championship and Wyndham Championship. If he earns enough FedEx Cup points to move inside the top 200 in the standings, he will be exempt into the Web.com Tour Finals. Once the Tour’s new wraparound season begins, he will be eligible to receive the full allotment of seven sponsor exemptions for non-members.

Schniederjans has gained plenty of pro experience in the past year. He played the European Tour’s Scottish Open last summer, Abu Dhabi at the start of the year, the Valspar Championship in March, last month’s U.S. Open (where he tied for 42nd) and last week's Scottish Open (T-77).

This was the most confident Schniederjans has ever felt during a tournament, and it showed at the Old Course. By making the cut, he joined Tiger Woods and Phil Mickelson as the only two amateurs since 1960 to play the weekend in both the U.S. Open and British Open.

Schniederjans played a practice round with Mickelson in the run-up to the Open – and then beat him in the year's third major, after finishing at 9-under 279.

Schniederjans, who lost a playoff at the 2014 NCAAs, wasn’t at his best during his final season at Georgia Tech as he tried to manage both his future plans and his own expectations.

Now that he’s graduated, Schniederjans says he can devote more time to his putting and his short game, which had fallen off during the spring season.

“When you lose your ball-striking, you lose everything because it takes up all of your time,” he said.

Schniederjans also worked hard to implement a few “big” changes with swing coach Sean Foley and was thrilled with the results.

“My game is in the best place it’s ever been,” he said.

When he finished his round, Schniederjans was one of four amateurs inside the top 20, three of whom have played college golf; if they finish there, it’ll mark just the second time that’s happened in the past 100 years.

“It’s fun again,” he said. “It’s not fun when you have no control over your golf game. I’m not searching every day. I’m working on the same things every day. I kind of lost myself, my game a little bit. I’ve gained some tools in my game, and I’ve gotten better, and I feel like I can compete at any level playing the U.S. Open and the Open here.”