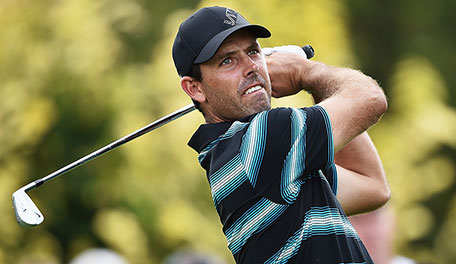 It all comes down to this.

The Wyndham Championship is the 43rd and final event of the 2014-15 regular season, and it represents the last chance for players to earn a spot in the FedEx Cup playoffs - not to mention a PGA Tour card for next season.

While several big names are teeing it up at Sedgefield Country Club simply to fine-tune their games for a postseason run, a few others have work to do this week in Greensboro, N.C. The bubble starts with former Masters champ Charl Schwartzel, who enters the week in the coveted No. 125 spot with 439 FedEx Cup points. Scott Langley sits one measley point behind the South African, but at No. 126 he is on the outside looking in. Both Schwarzel and Langley are in the Wyndham field, although Schwartzel's card for next season is secure thanks to his win at Augusta National in 2011.

All eyes will be on Tiger Woods as he makes his Wyndham tournament debut this week. Woods is No. 187 in the points race, 292 points behind Schwartzel and needing a victory to make the postseason. But other notables outside the number include defending Wyndham champion Camilo Villegas (129th), David Toms (140th), Martin Kaymer (149th), Ernie Els (170th) and Davis Love III (186th).

While many of the bubble boys will tee it up at Sedgefield with the hopes of making a big move, the recent odds haven't been in their favor. Last year only Sangmoon Bae cracked the top 125 at Wyndham, moving from 126th to 120th, while in 2013 no one played their way into the playoffs in the season's final event.

Although this week's winner will receive 500 FedEx Cup points and almost certainly a spot in the playoffs, a 10th-place finish offers only 75 points. That means that anyone currently ranked below Charlie Beljan at No. 142 will need at least a top-10 finish - and perhaps some help - in order to earn a ticket to The Barclays next week. Everyone below Cameron Percy at No. 154 will need at least a fifth-place finish, which is worth 110 points.

Since the advent of the playoffs in 2007, the lowest-ranked player entering the Wyndham to earn a postseason berth was Scott Piercy, who was 140th in 2010 but made it to The Barclays after a T-8 finish at Sedgefield.