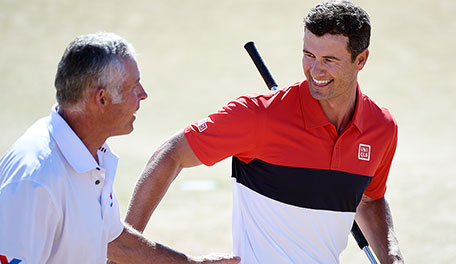 UNIVERSITY PLACE, Wash. – Adam Scott shot the lowest round of the week in the final round of the U.S. Open and hardly anyone noticed.

The former Masters champion, with former caddie Steve Williams back on the bag this week, was tied for 19th place at the beginning of the day. He calmly and quietly shot a bogey-free 6-under 64 to finish well ahead of the leaders at 3-under-par total. Ultimately he tied for fourth place.

“I needed to make a run today and it was interesting as I went along just to see how the course was set up,” Scott said. “I played really well and I took advantage of some of the holes playing a bit shorter and didn’t have any disasters out there and hit a few good shots and took advantage of them.”

Scott has not played particularly well since a fourth-place tie at the WGC-Cadillac Championship in March. He’s hoping this will spark better results this year, which includes playing in the Presidents Cup for his beloved International team.

“It’s the kind of round I needed to get things going for me this year, hopefully,” he said.