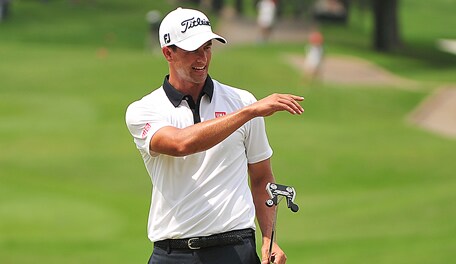 Beginning the third round at Huntingdale with a share of the lead, Scott stumbled to a 6-over 77. The score dropped him into a tie for 11th, five shots behind leader Matthew Millar heading into the final round.

Scott opened his round with a bogey, and things did not improve from there. His birdie on No. 2 proved to be his lone circle on the scorecard, and he suffered back-to-back bogeys on three different occasions: Nos. 6 and 7 – both par 5s – Nos. 10 and 11, and Nos. 17 and 18.

This has become a tale of two tournaments for Scott, who got off to a promising start only to see his chances unravel. He held the lead after an opening 64 and built a five-shot cushion at one point during the second round after getting off to a strong start.

But he struggled to close out his second round, coming home in 3-over 38, and faltered again Saturday. After playing his first 27 holes in 11 under par without dropping a shot, Scott has played his last 27 holes in 9 over while making only two birdies.

Windy conditions made scoring difficult, with only five players breaking 70 in the third round, but Scott's 77 was better than only 10 players among the 67-man field. He remains in search of his first worldwide win since the 2014 Crowne Plaza Invitational.