Scott out of putting 'rut,' back in major contention 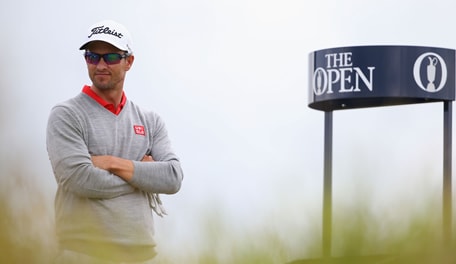 ST. ANDREWS, Scotland – Looking for something, anything, to heat up his ice-cold putter, Adam Scott switched to a Titleist Scotty Cameron X6 prototype design last month.

Coming off a T-4 finish at the U.S. Open in which Scott said that he “putted lovely” on the bumpy greens at Chambers Bay, Scott is brushing his way to another solid performance on the greens as he sits inside the top-5 heading into the weekend at the Open.

“Sometimes those little switches just spark something,” he said after a 67 Friday.

Scott was nearly last in strokes gained-putting while he stumbled his way through the Florida Swing. He is committed to the broomstick putter for the rest of the year, until the anchoring ban takes effect Jan. 1. Then, he said Friday, he’ll simply move his top hand (his left) a few inches from his sternum.

Scott is still ranked 192nd on Tour in putting, but so far he has fared well on the massive, undulating greens on the Old Course. He has just one three-putt, taking 31 swats each of the first two days.

“I was in a rut, for sure,” Scott said, “and that was frustrating. That was holding me back. It was a nice time to switch and get a little confidence going with it.”