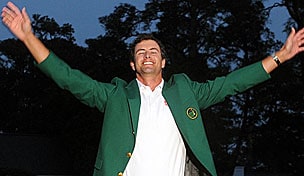 Getty Images
PEBBLE BEACH, CA - JUNE 20: Ernie Els of South Africa (2nd-L) walks with Phil Mickelson (2nd-R) and their caddies on the second hole during the final round of the 110th U.S. Open at Pebble Beach Golf Links on June 20, 2010 in Pebble Beach, California. (Photo by Harry How/Getty Images)  -

Adam Scott hasn’t planned the menu for his Champions Dinner at Augusta National, but not surprisingly it will feature an Australian theme.

“I'm actually working on that this week,” said the first Aussie champion during a teleconference in advance of April’s edition of the Masters. “I've got to put some time into thinking about that. I'd like to serve something that everyone will really enjoy, and nothing too crazy so that they won't.

“But probably no surprise to anyone, there's definitely going to be an Australian theme toward every part of the dinner, and whether that means they are eating kangaroo, I'm not sure yet, but we'll see.”

As is tradition, the reigning Masters champion hosts dinner for the past champions on Tuesday night of tournament week. That will take place on April 8 this year.