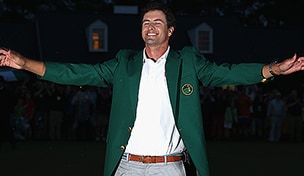 Getty Images
ATLANTA, GA - SEPTEMBER 25: Henrik Stenson of Sweden looks over the sixth green during the second round of the TOUR Championship By Coca-Cola at East Lake Golf Club on September 25, 2015 in Atlanta, Georgia (Photo by Kevin C. Cox/Getty Images)  -

PALM BEACH GARDENS, Fla. - While Adam Scott won't yet divulge what he plans to serve his fellow Masters winners at the annual Champions Dinner this spring, he did offer one item that will make the menu at Augusta National in April.

Scott explained Tuesday that he is planning to serve his mother's pavlova - a meringue-based dessert - as part of the meal.

"Her recipe," explained Scott. "She might be nervous (to cook) with Arnie and Jack in the other room."

Scott won the season's first major in a playoff last year over Angel Cabrera, and as reigning Masters champion will decide the fare served at the dinner Tuesday night of event week, a meal that annually gathers one of golf's most exclusive clubs.

It has long been rumored that the main course on Scott's menu will be Moreton Bay bugs, an Australian staple similar to lobster. While he wouldn't confirm their inclusion, Scott offered another hint that the shellfish are likely to make the final cut.

"That would be a pretty good guess," he added.