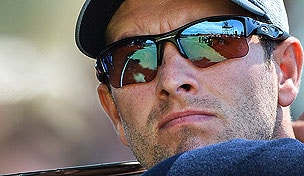 MELBOURNE, Australia – Following three consecutive birdies to start his second round at the Australian Masters, Adam Scott cooled and finished with a 5-under 66 for a share of the lead at Royal Melbourne.

Scott, back home for the first time since becoming the first Australian to win the Masters, was tied with Nathan Holman at 9 under following his victory last week at the Australian PGA Championship.

They lead by one over Australians Matthew Griffin (65) and first-round leader Nick Cullen (69). Matt Kuchar (66) is four strokes back, while Vijay Singh (68) is seven in arrears.

Scott is vying to become the first player to claim the Australian Triple Crown, which includes the Open in two weeks, since Robert Allenby in 2005.

Perhaps even more concerning for the rest of the field at Royal Melbourne is how easy Scott is making it look, largely playing from the fairway and hitting 77 percent of his greens in regulation.

“It didn’t exactly have a 5-under feel to it. I just plodded along,” he said. “But I got it pretty down the line at the moment.”

Jarrod Lyle, competing in his first event since he second bout with luekemia, shot 71 to make the cut.