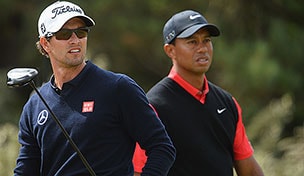 Getty Images
PALM HARBOR, FL - MARCH 16: Justin Rose of England plays a shot on the 9th hole during the second round of the Transitions Championship at Innisbrook Resort and Golf Club on March 16, 2012 in Palm Harbor, Florida. (Photo by Sam Greenwood/Getty Images)  -

Not so long ago – a half-decade or so, to be more precise – it was a special commendation for any player not named Tiger Woods to win a major championship in the so-called Tiger Era.

That may be the case, but with Woods failing to claim a major since the 2008 U.S. Open, it’s left the door open for others to walk through.

“It wouldn't surprise me that Tiger comes and wins again this year, but I think my generation of player is feeling like their time is now, so they have got to take advantage of it,” reigning Masters champion Adam Scott explained during a Tuesday teleconference in advance of this year’s edition of the tournament. “I just feel like the way it's been shared around a little bit lately, you've seen my generation of player and the Justin Roses who have got to that level where they have put 10 or 12 years’ experience in the bank; they have raised the level of their own game over the last couple years and believe it's their time to do it, and they are not worried about Tiger Woods or Phil Mickelson or a young guy like Rory McIlroy. They are just into their own thing.”

Scott said he believes Woods is still very much a viable candidate to win a major at 38 and beyond.

“I don't necessarily think it's that Tiger is not a factor. He certainly is a factor. He's the No. 1 player in the world, and he's always there or thereabouts. It's he's on a dry spell at the moment and that's what happens in a career.

“I think he's still obviously a favorite in everyone's mind – including the players – that he's going to be around the mix.”