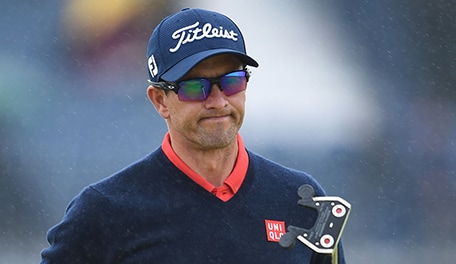 ST. ANDREWS, Scotland – For a player who has come so close before at the Open Championship, the events bordered on cruel and unusual.

Adam Scott, whose heartbreak at the 2012 Open is the kind of thing sport psychologys majors write thesis papers about, did what he needed to do on Monday on the Old Course’s outward loop, charging out in 31 and taking a share of the lead with a birdie at No. 7.

But as the contenders turned for home and began the trek into a wet, cold wind, he knew he needed to do even better if he were going to finally lift the claret jug. And he was far from perfect on that stretch.

The double bogey-6 at the last will stand out on his card, but the damage - the real damage - had already been done. It came on the par-5 14th hole, when his 1-footer for par wandered past the hole and with it his title chances.

“Just one of those stupid things that happens, and that really put me in a tough position to where finishing with a handful of [birdies] was unlikely on a day like today,” said Scott, who closed with a 71 to tie for 10th place.

Scott, who reunited with caddie Stevie Williams recently to focus on this year’s remaining majors, finished runner-up to Ernie Els in 2012 after making bogey on his last four holes at Royal Lytha. He had finished inside the top five in the last three Opens before St. Andrews.

“It's hard to digest it all at the moment,” said an emotional Scott. “Maybe it was too much to ask today.”