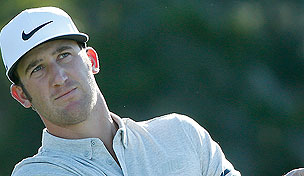 ST. SIMONS ISLAND, Ga. – Sometimes, the breaks just go your way. Such was the case Friday for Kevin Chappell, who successfully battled windy conditions to post a 2-under 68 in the second round of the McGladrey Classic.

“You hit some not-so-perfect shots and get some bad breaks with the wind gusting, and you get exposed really quickly,” explained Chappell, who held the clubhouse lead after posting a 7-under 133 total through 36 holes. “I think I was fortunate to come to that realization that there’s some luck involved today, and that maybe for a period of time I was one of the luckier guys out here.”

On a day when gusty winds forced the Seaside Course scoring average well over par, Chappell was able to move up the leaderboard thanks to a round that included four birdies in addition to an eagle at the par-5 15th hole. The former UCLA standout found it easier to deal with Friday’s blustery conditions knowing in advance what to expect.

“I think in the back of our minds we all knew this was coming,” he said of the winds that routinely exceeded 20 miles per hour. “This was what they’ve been predicting, so at least they were consistent and correct.”

Firmly in contention heading into the weekend, the 27-year-old is maintaining a balanced perspective as he looks to secure his first career PGA Tour victory after a pair of runner-up results.

“It was good. It always could be better,” he added. “But you know, the goal on a day like today when you’re in the lead is to not play out of it. It was going to be hard to run away with it.”