Senden overcomes injuries, returns to No. 60 in OWGR 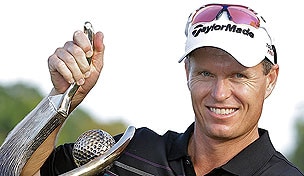 John Senden scored a victory for the veterans Sunday at Innisbrook when he became the first over-40 winner on the PGA Tour this season.

The 42-year-old Australian had to wait nearly eight years to capture his second career PGA Tour title, following his maiden triumph at the 2006 John Deere Classic.

After beginning last year at No. 39 in the world rankings, Senden battled rib and wrist injuries and tumbled all the way to No. 125. His victory Sunday at the Valspar Championship returned him to No. 60 in the world.

Kevin Na also made a huge jump after finishing solo second in Tampa, his fourth top 10 this season. The 30-year-old rose from No. 175 to No. 80.

Other notable moves from Innisbrook include Luke Donald, who jumped from No. 25 to No. 21 with his fourth consecutive top-6 finish there, and Scott Langley, who matched his best career result (third) on Tour and ascended from No. 327 to No. 185.

Alejandro Canizares, a wire-to-wire winner at the European Tour’s Trophee Hassan, moved from 141st to 89th.

Here is the top 10 in the world heading into the Arnold Palmer Invitational at Bay Hill: world No. 1 Tiger Woods, Adam Scott, Henrik Stenson, Jason Day, Phil Mickelson, Justin Rose (from No. 7), Rory McIlroy (from No. 6), Dustin Johnson, Sergio Garcia (from No. 10) and Zach Johnson (from No. 9).