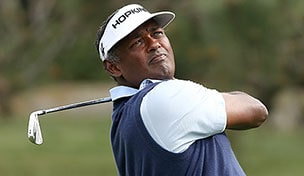 Getty Images
<a href='https://instagram.com/p/3sD9CwxWRN/' target='_blank'>@lukedonald</a>: It's been a while since I walked 36 holes, but we made it! @patgossnugolf did a fine job on the bag, enjoying a nice glass of red in celebration #RoadToChambersBay #USOpenQualifier  -

Vijay Singh appeared to move a step closer to getting his day in court on Feb. 3 as lawyers for the Fijian and the PGA Tour made their final arguments before justice Eileen Bransten in New York Supreme Court.

Bransten heard final arguments from both sides regarding the circuit’s move to deny Singh’s legal team a number of discovery requests and may have eluded to the court’s pending decision on whether to grant the Tour’s motion to dismiss the lawsuit, which stemmed from Singh’s dust up with the Tour’s performance-enhancing drug program last year.

“I want this motion to compel to be tailored to the remaining causes of action that I’m not dismissing. So now you know. You know the answer.”

Bransten later said her final decision would come after the publication of the transcript from last week’s hearing (Feb. 10).

Lawyers for both sides argued for and against a handful of discovery requests, with a focus on Singh’s request for information pertaining to other possible doping violations.

“I can stand here in court today and provide the court with four or five or six or seven other names of similarly situated golfers who the (Tour) treated differently,” argued Singh’s attorney Peter Ginsberg. “Because there are other golfers, the (Tour) knows there are others golfers, and it’s simply disingenuous to say that we haven’t made our allegations specific enough.”

Although both sides have agreed to a confidentiality agreement – adding a stipulation that even Singh could not be allowed to view some materials that are deemed “highly confidential information” – attorney’s for the Tour warned that the disclosure of such material could harm the reputation of third-party golfers.

“How other golfers were treated has nothing to do with whether or not the Tour committed a tort against Mr. Singh by not conducting any additional testing,” the Tour’s attorney Jeffrey Mishkin said.

The Tour’s concerns over a possible violation of the confidentiality agreement, however, did not seem to sway Bransten.

“We do not have star chambers, I definitively do not conduct my courtroom with any idea that we’re going to have a system of closed doors,” Bransten said. “I cannot diminish or curtail the right of a plaintiff or defendant to what is rightfully their right to a discovery item (if) it might have other consequences.”

Mishkin also argued that Singh’s claim that he was treated differently than other Tour members – most notably Mark Calcavecchia, who Singh claims admitted to using the same deer-antler spray as Singh yet wasn’t sanctioned by the circuit – should be dismissed because the testing program allows for disparate treatment under the discretion of Tour commissioner Tim Finchem.

“There is no requirement of uniformity of treatment under the drug program. There couldn’t be. The commissioner has every right to treat different cases differently,” Mishkin said.

Singh, who is scheduled to play this week’s Northern Trust Open, sued the Tour last May after he was suspended and later absolved of a doping violation for his use of deer-antler spray, which contains IGF-1, a growth hormone like HGH that is on the Tour’s prohibited list.