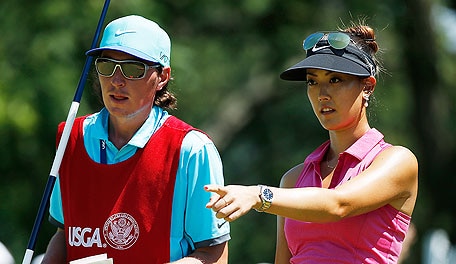 That’s what her caddie, Duncan French, sensed. Wie is feeding off the excitement of being back on the leaderboard in her title defense, feeding off a rush of sensations that is proving medicinal as she hobbles her way around giant galleries at Lancaster Country Club with an aching left hip and ankle.

“I think there’s adrenaline helping her through,” French said. “You make birdies and hear all that noise out here, and you don’t feel the pain as much.”

Still, Wie believes she has a chance. She is relishing the fact that her new swing’s producing so many good shots. She’s relishing a return of confidence even with a giant deficit to erase on Sunday. Wie was checking leaderboards all day to see where Yang was.

“I was definitely focusing a little bit on it,” Wie said. “I knew I had to post a low number, which is a little frustrating.”

Frustrating because Wie got to within five on the front nine but made bogeys at the eighth and ninth holes to slow her early charge. Wie made six birdies and four bogeys on the day. She hit 10 of 14 fairways, her best effort of the week. She also hit 14 greens in regulation, most she has hit this week.

“Those easy bogeys were a little bit frustrating,” Wie said. “I felt like the birdies came today . . . You can't really be making bogeys out here. I'm grateful that I have an opportunity, I have a chance. So I'm going to try to do as much as I can with it.”

Wie was diagnosed with bursitis in her left hip after withdrawing from the Kingsmill Championship two months ago. She’s also dealing with related pain in her left knee and left ankle. She has had a cortisone shot and two platelet-rich plasma injections since the diagnosis. She also started overhauling her swing six weeks ago, narrowing her stance to ease the stress her former swing was putting on her lower left body.

Wie could be seen punching her left hip with a fist at one point on the back nine.

“I just feel like there’s a knot in it sometimes,” Wie said.

The steep climbs on the hills at Lancaster haven’t helped her.

“I've kind of embraced it,” Wie said. “I've played with the pain for a while. I know what to expect. Nothing is unexpected. I'm good to go for tomorrow.”