To Slam or not to Slam? 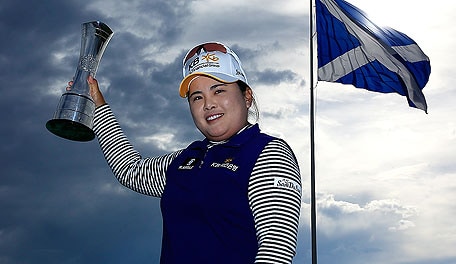 Now that she has won four different major championships – the Women's British Open, the ANA Inspiration, the Women's PGA Championship and the U.S. Women's Open – does Inbee Park have a career Grand Slam?

The Associated Press says no.

The complicating factor is that the LPGA has five majors. The Evian Championship, played in France, was given major status in 2013. Park won it, but in 2012, before it was considered a major.

Here's a summary of the positions of the three organiations listed above:

The phrase “Grand Slam” originated in card games in the early 1800s as a way to describe the winning of all possible tricks in a single game. The phrase is most closely connected to the game of Bridge, in which a standard deck of 52 playing cards is divided evenly among four players. There are 13 matches, or tricks, played in which each player uses one card with the goal of winning that particular trick. If a player wins all 13 tricks, he or she is considered to have won a Grand Slam. Park has not won all possible LPGA majors, since the Evian was not considered a major when she won it.

Same reasoning as Golf Channel – Park needs to win an Evian Championship to complete a career Grand Slam. The AP's position is significant because its copy is carried by thousands of news outlets around the world, including newspapers, websites and TV and radio stations.

To the LPGA, the number 4 is central to the concept of a Grand Slam. "Despite the dictionary definition of grand slam, when translated to golf it has been widely understood that accomplishing the grand slam has been to win all four major championships," reads part of a release sent by Kelly Thesier Schultz, the LPGA's director of media communications.

The release also notes that the LPGA has not always had four majors. Since the organization was founded in 1950, its number of annual majors has varied from two to three to four to five.

"For players (active or retired) who have won four different majors available in their careers, the LPGA has and will continue to acknowledge them as having accomplished a Career Grand Slam," the release states.

"And for players (active or retired) who have won five different majors available in their careers, the LPGA has and will continue to acknowledge them as having accomplished a Super Career Grand Slam.

"Likewise for players who win four consecutive majors in a single season, the LPGA will acknowledge them as having accomplished a Grand Slam.

"And for players who win five majors in a single season, the LPGA will acknowledge them as having accomplished a Super Grand Slam."

Park's triumph Sunday at the Women’s British Open was something to marvel over on so many levels. It was grand, that’s for sure. It’s just a shame there’s a debate now over whether it constitutes a career Grand Slam. She deserves praise, tributes and admiration for this stockpile of achievements, and it’s just mucking things up that we’re struggling to know what to definitively call it.

There’s something about the arguments here that can’t be definitively reconciled, but there’s no arguing Park is a very special player who deserves better than the equivocation the LPGA creates with its fifth major.