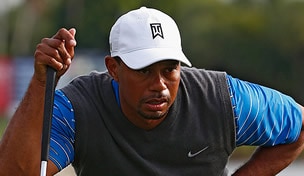 Getty Images
Justin Thomas was as hot as a Hawaii volcano in January 2017. In the opening event of the year, the Tournament of Champions, he shot 22 under and won by three. But he was just getting started. The very next week, in the opening round of the Sony Open in Hawaii, he shot 59, becoming the youngest player (23) in PGA Tour history to break the 60 barrier. He opened and closed his historic round with eagles. He didn’t break 60 again that week, but he finished at 27 under, winning by seven shots.  -

PALM BEACH GARDENS, Fla. – If the road to Augusta starts here at the Honda Classic, then Tiger Woods showed Thursday that there still are a few more roadblocks before he is ready for the Masters.

Woods holed a 10-foot birdie putt on his final hole to salvage a 1-over 71 that left him six shots back of the early leaders at PGA National.

“It certainly wasn’t together today,” he conceded after hitting eight of 14 fairways, only 12 greens (despite playing preferred lies) and taking 30 swipes with the putter.

Woods, of course, is off to the worst-ever start of his pro career, having tied for 80th at Torrey Pines, where he has won eight times, and finishing T-41 in Dubai, where he is a three-time winner.

After nearly a month off, Woods said he had difficulty adjusting to the slower green speeds at PGA National and was fooled by the grain on several occasions.

“They were as slippery as can be last year,” he said, “where now they are sticky and slower.”

This is Woods’ third start as a pro at PGA National, and he has failed to break par in each of his past five rounds here. A year ago, he shot 4-over 284 and tied for 37th.

Woods began his day with four consecutive birdie looks inside 20 feet, but missed them all. He scrambled in the middle of the round to stay at even par, but he made a double bogey on the par-4 second (his 11th of the day), when his drive settled under a palm tree and he could advance his second shot only 30 yards.

Woods also made a sloppy bogey on No. 8 before bouncing back with the closing birdie at the ninth.

“I hit it good enough to shoot probably at least three or four lower than I did,” he said. “I had so many looks where I just missed, and I just need to read them a little bit better than I did today.”