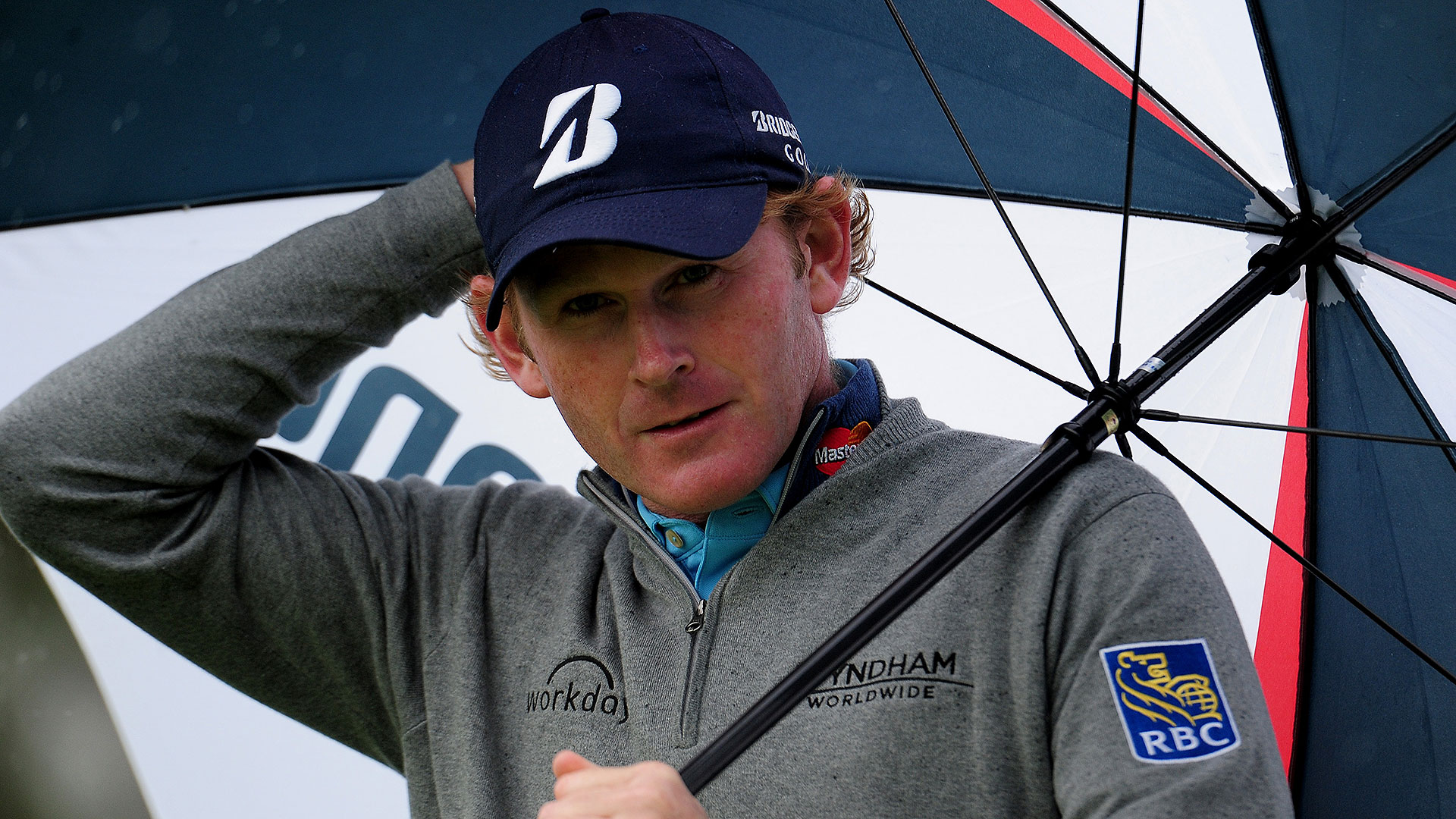 SAN DIEGO – Brandt Snedeker was standing on a platform outside the scoring area when the horn sounded for the third time Sunday.

Snedeker had just finished what he said was one of the best rounds of his career, a 3-under 69 that was more than nine strokes lower than the field average on Torrey Pines’ South Course (78.119).

“I want them out there playing,” he said with a smirk, “since I had to play through this all day. I want them to be out there going through the misery that I had to go through.”

Of the 71 players who began the final round at the Farmers Insurance Open, Snedeker was the only one who is under par on a cold, raw day with blinding rain and 35-mph gusts.

Now, he has to wait to see if it was enough.

Starting the day six shots behind the leaders, Snedeker finished at 6-under 282, which is one shot behind Jimmy Walker, who still has eight holes left to play.

Play was eventually called for the day at 4:57 p.m. ET, when 40-mph gusts made the course unsafe for players, spectators and media. The final round will resume at 11 a.m. ET Monday.

“It was like playing a British Open on a U.S. Open setup,” Snedeker said.

Snedeker’s game has been revitalized after an offseason session with swing coach Butch Harmon when they overhauled Snedeker’s setup position. Since the start of the new year, he tied for third at Kapalua and lost in a playoff at the Sony.

He has already won here at Torrey Pines, in 2012, under what was another unusual set of circumstances.

Snedeker thought he’d come up short that year, with Kyle Stanley holding a three-shot lead on the par-5 finishing hole. Inexplicably, Stanley spun his ball back into the pond and three-putted for triple bogey. Snedeker, who had finished hours earlier, eventually won on the second playoff hole. Three times in his career he has erased a final-round deficit of five or more shots.

“Feels eerily similar, actually,” Snedeker said, looking out toward the course, where the leaders were just making the turn.

Snedeker’s only dropped shot Sunday came on the first hole, in the worst of the conditions. He didn’t lose much ground to the field, however; the 442-yard, into-the-wind hole played to a 4.65 average.

Snedeker made eight consecutive pars – none more impressive than canning a 35-footer on 4 – before ripping off four birdies in a five-hole span to start the back nine: a 6-footer on 10, a 2-footer on 12, a 37-footer on 13 and a 12-footer on 14. His best shot, according to caddie Scott Vail, came on the par-3 16th, which was playing into a severe crosswind. Snedeker's 5-iron shot landed 14 feet away and was unlucky not to trickle down the ridge, leading to a stress-free par.

In all, he played the last 17 holes without a bogey.

“Damn good,” Vail said. “He just did everything right today.”

Snedeker lamented his par on 18, where he failed to get up and down from behind the green. But he wasn't about to complain, not when he still has a chance to win when play resumes Monday.

“One of my best rounds on Tour, by far," he said. "Under these conditions, to shoot anything under par or around par is a good round. To shoot 69 when you need to, really special.”