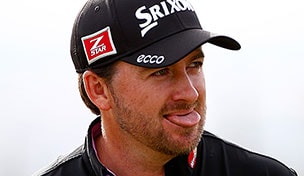 Getty Images
"I saw Rich in the hotel this morning, so I went over and said, 'That's awfully kind of you to do this.'" -- Poulter on thanking Beem for giving up his spot in the field in Hong Kong  -

MARANA, Ariz. – Graeme McDowell slumped into his chair in the interview room at the WGC-Accenture Match Play Championship and was asked about his day. The Northern Irishman unleashed a long, exhausted sigh.

And if that didn’t sum up his week, McDowell described his wild three days on Dove Mountain as “outrageous,” “embarrassing,” and “incredible.”

Pushed past regulation for the second time in three days, McDowell birdied the third extra hole to beat Hunter Mahan on Friday. All total, G-Mac has played 58 holes – following his victory over Gary Woodland in Round 1, 19 holes, and Hideki Matsuyama, 1 up, on Thursday. He’s also found himself 2 down through two holes in each of his first three matches.

“I’d really like to birdie the first tomorrow,” he smiled.

Perhaps even more impressive is that he’s yet to hit a tee shot leading a match. Interestingly, his quarterfinals opponent Victor Dubuisson has not trailed in a match this week.

“You might win one of those three matches but you’re certainly not going to win all of them,” he said.

McDowell battled back to square his match with Mahan, but lost No. 15 to a birdie and the 16th when he made a bogey but forced extra holes with a 6 footer at the 18th hole and ended the match with a 14 footer for birdie at the 10th hole (which was the third playoff hole).

Asked what he said to Mahan after the round, McDowell dropped his head, “I said everything but sorry.”