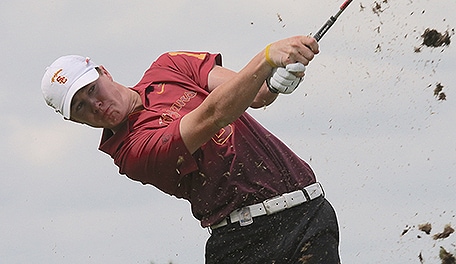 There’s no faking it around Southern Highlands Golf Club, so it’ll be worth remembering come postseason time that Southern Cal and Florida standout freshman Sam Horsfield each scored impressive victories there.

The Southern Highlands Collegiate in Las Vegas is the top-ranked event during the regular season, with nine top-20 teams competing on a punishing setup that always crowns a deserving champion.

Only four players finished the 54-hole event under par. Leading the way was Horsfield, Florida’s superb freshman and the protégé of PGA Tour player Ian Poulter. Horsfield broke par all three rounds and won by four shots at 7-under 209. He has two wins this spring and has finished outside the top four only twice this season.

USC sophomore Sean Crocker (pictured), a 2015 U.S. Amateur semifinalist, was second. Arizona State senior Jon Rahm shared the 36-hole lead with Crocker, but the world No. 1 amateur shot 79 on Wednesday. The scoring average in the final round was a tick under 76 (75.99) on a day when the hole locations were brutal and the greens firm and fast.

The Trojans now have three wins this season, all of which have come in the spring. They topped a field Wednesday that included No. 1 Illinois, No. 6 Arizona State, No. 8 Alabama and No. 11 Texas.