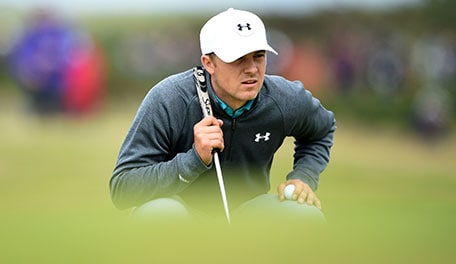 ST. ANDREWS, Scotland – Jordan Spieth said it best, “I don’t normally putt the way I did.”

That’s the truth. The man who flat out finds a way to get the ball in the hole had five three-putts and 37 putts during the second round of the Open Championship, both career highs as a professional.

You knew that wasn’t going to continue.

Spieth spent some extra time on the practice green Saturday and was a new man on Sunday shooting 67 with only 27 putts. He’s only one shot off the lead heading into the final round at the Old Course.

“I just had been aligned a little left,” Spieth said. “Every putt was missing just a little off the left side of the hole, so I just tried to adjust.”

Spieth was miffed after making bogey on the par-4 ninth hole because he had a pitching wedge into the green. He then cruised to three consecutive birdies on the next three holes and made key par saves on both the 13th and 17th holes down the stretch.

“I kind of just wanted to stay patient today, let them come to me, and once I figured out my putting, it did,” Spieth said. “Yeah, I believe when I was standing with you yesterday that a day like today could happen, but in order to win you’ve got to duplicate it.”