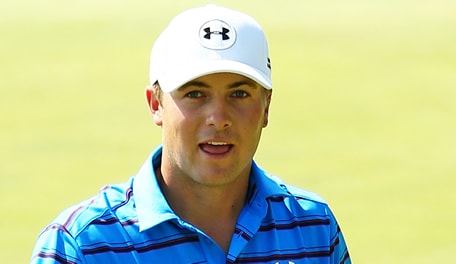 SHEBOYGAN, Wis. – Major fatigue hasn’t kicked in yet. Jordan Spieth doesn’t expect it to, either.

“I’ve got a chance to win a major championship,” he said. “Just thinking about that gets you enough adrenaline so that there won’t be any issues.”

Spieth put himself in position Friday to cap what has already been a historic season.

A holed bunker shot on his ninth hole of the day was just the spark that Spieth needed during a 5-under 67 that left him one shot off the clubhouse lead as the afternoon wave got underway at Whistling Straits.

Trying to join Ben Hogan and Tiger Woods as the only players to win three majors in a season, Spieth is at 6-under 138, just one shot back of David Lingmerth.

When Hogan and Woods won No. 3, they had at least a share of the 54-hole lead. To get in that position, Spieth said that he needs to improve his driving – he has only found 16 of 28 fairways and expressed concern about overdrawing his shots with the wind. He has been able to make up for any deficiencies with two chip-ins and smart course management.

“In order to keep shooting rounds like today, I’m going to need to drive the ball a little bit better and make a few more putts, which are really the two keys for me this weekend,” he said. “It’s just going to get more challenging with pin locations and the firmness of greens.”