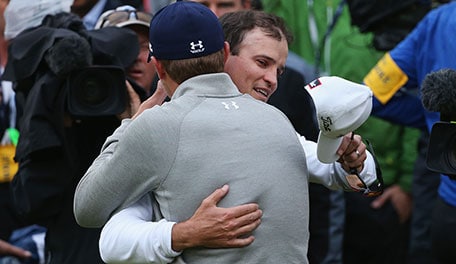 As if we'd expect anything else from the men who nabbed three of the four majors this year, both Jordan Spieth and Zach Johnson brought the heat (for a pair of golfers) on their first pitches tonight.

Both players looked pretty good and Johnson's fast ball was a deceptive 95 miles per hour.

So whose pitch was better? Let us know in the comments below.

Jordan Spieth and Zach Johnson, who combined to win the first three majors this year, both have plans to throw out ceremonial first pitches this evening. Spieth will be feted in Arlington, Tex., before the game between the Texas Rangers and the Seattle Mariners. Johnson, meanwhile, is in Chicago for a promotional event for the upcoming BMW Championship and will throw out the first pitch before the Cubs play the Detroit Tigers.

The occasion sparked a bit of Twitter banter - and a friendly wager - between the two friends, but much like at St. Andrews, Johnson appeared to get the upper hand in the trash-talking department:

@JordanSpieth pro, I'm throwing out first pitch at Cubs game tonight too. How about dinner on who throws better pitch? @espn decides? #heat

@ZachJohnsonPGA @espn old man.. I'd be surprised if you reach the plate #crowhop

@JordanSpieth @espn I guess it's on "young-blood". You won't have @michael_greller to give you a read from the rubber. #JustYou

Because a good caddie is always there to support his player, Greller chimed in with a contribution to give Spieth a traditional dose of pre-shot encouragement:

In addition to dinner, a donation to charity has been added to the friendly wager: