Spieth leaps to top of Deere leaderboard with 61 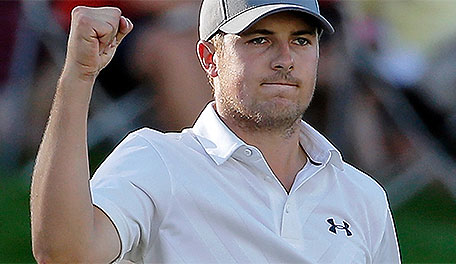 Apparently Jordan Spieth was right about just needing more "reps." In his 18 reps in Saturday's third round of the John Deere Classic, he made two eagles, six birdies and 11 pars in shooting a 10-under 61, the best score of his PGA Tour career, to rocket to the top of the leaderboard. Here's how things stand going into the final round in Silvis, Ill., where Spieth leads Danny Lee by two shots.

What it means: Of course it means Spieth is now the favorite to win here on Sunday, but it also bodes extremely well for his chances next week at St. Andrews, where he will try to make the Open Championship his third consecutive major. Spieth took a lot of heat for honoring his commitment to play in the Deere rather than head to Scotland a week early and either play in the Scottish Open or get in some early practice at the home of golf. And while conditions on the Old Course aren't likely to be anything close to what Spieth has seen this week at TPC Deere Run, including Saturday's lift-clean-and-place-fest, there's something to be said for good golf begetting more good golf.

Round of the day: We'll go out on a limb here and nominate Spieth's bogey-free 61, which included making two eagles on par 5s - one by reaching the green of the second hole in two and one-putting and the other by holing out from 106 yards on the 17th - hitting the flagstick from 144 yards on the eighth hole (and of course making the 24-foot putt), hitting 10 of 14 fairways and 14 of 18 greens and taking only 23 putts. He punctuated things by finishing birdie-eagle-birdie.

Best of the rest: Lee, who won last week's Greenbrier Classic in a four-way playoff, was right behind Spieth, shooting a 62. He made nine birdies in a bogey-free round.

Biggest disappointment: Bryce Molder stood seventh after opening 68-65. But he shot 73 on Saturday and plunged 25 spots.

Main storyline heading into Sunday: It's all about Spieth and how his game looks as he gets ready to head for Scotland. He's trying to match Ben Hogan's 1953 feat of winning the first three majors of the year. But first he'll try to close out his second Deere win. It's not a lock - seven other players are within four shots of him. Still, you want to bet against him?

Quote of the day: "For me right now it's all about having face control at impact." - Spieth