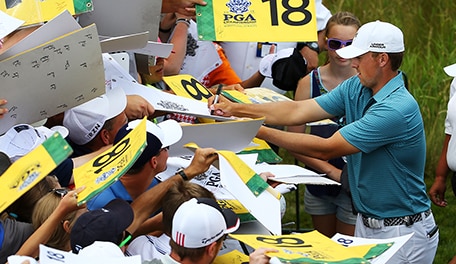 Jordan Spieth found that out after winning the Masters this year. He noticed how the spotlight intensified even more after he won the U.S. Open, as well.

“Instead of being recognized in and around Dallas and Austin and really the state of Texas, at dinners and wherever you go, just people recognizing you there, now it kind of happens everywhere,” Spieth said Wednesday at the PGA Championship. “Recognizing that people, I guess now, pay attention more to the majors than anywhere else and so throughout the last few months it's harder to get around.”

Not that he’s complaining. Spieth recognizes that the perks of being a major champion far outweigh any disadvantages or sacrifices of privacy. He just has to work a little harder to be more inconspicuous.

“You've got to find different ways to go about it; find secret passageway places and whatever it is, find corner booths. But at the same time it's not negative, it's something that's really cool, it's a great problem to have. I wouldn't want it any other way, I really wouldn't," he said.

Spieth's best piece of advice for dealing with fame: “If you want to have a quiet dinner, you better bring it home to your house.”