Spieth recollects where he was this week last year 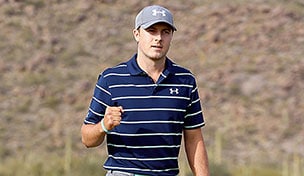 DORAL, Fla. – One year ago this week, Jordan Spieth decided to take a break from his schedule of Web.com Tour events in hopes of earning a card on the developmental circuit and took a sponsor’s exemption into the Puerto Rico Open, where he enjoyed the week with friends and family.

He enjoyed it in other ways, too.

Spieth finished in a share of second place that week, launching a whirlwind 52-week period during which he won the John Deere Classic, competed in the Presidents Cup and has ascended to 12th in the current world ranking.

“I almost look back at a year ago this week and just think about that week and how big it was for me and I don't really look at everything that happened since then,” he said Wednesday. “It kind of jump‑started things, but really, the Web.com event started things for me. I played great the two weeks leading up to Puerto Rico, played well in Panama and Bogotá and went to Puerto Rico with a lot of confidence instead of Chile and took the exemption. The whole week was so much fun; I had family, friends getting to hang out at the beach in a really relaxed environment.

“It's just funny to think back to that week and how I didn't even think I was going to have PGA Tour status last year at this point.”

This week, the 20-year-old Spieth will once again tee it up amongst the world’s best, playing in a WGC-Cadillac Championship field that will include each of the world’s top 50.

A year ago, he didn’t know he’d make it here so quickly.

“I'm extremely excited to be here,” he said. “Never been to Miami before, so that's also new. But you know, I didn't know how long it would take, but I had trust and confidence in my game that I would be here eventually and happy to be here so soon.

“I feel very comfortable in an event like this, which, you know, it takes playing in one or two to kind of have your comfort level settled down, because it's a really big tournament with one of the best fields of the year.”