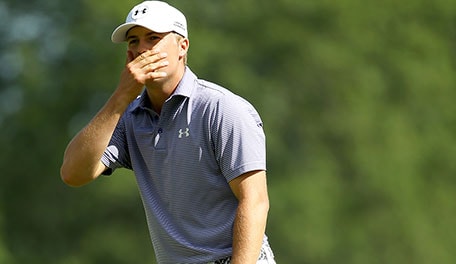 AKRON, Ohio – It wasn’t pretty, but Jordan Spieth was finally able to break par at the WGC-Bridgestone Invitational.

Spieth struggled with control throughout his second round, but ultimately carded a 2-under 68. It marked his first sub-70 effort in six trips around Firestone Country Club, and at 2 under he remains in contention at the halfway point, albeit six shots behind leader Jim Furyk.

Spieth hit only five of 14 fairways and found just 10 of 18 greens in regulation during the second round. He made the most of his chances, though, carding six birdies including a chip-in from behind the green on No. 3 and a birdie on No. 9, his final hole of the day.

“Really happy with the finish. I felt like, even though I only hit (four) greens on the front nine, which was my back nine, I hit a lot of really good shots,” Spieth said. “Very pleased with the way I can make six birdies hitting (10) greens. That’s a nice percentage if we could up the greens in regulation.”

Spieth opened with a birdie but quickly gave it back with bogeys on Nos. 11 and 12, and did not make a par until his sixth hole of the day. He appeared flummoxed by fickle course conditions throughout the round, even throwing his ball in frustration after a three-putt bogey on No. 5.

“When I was on No. 8, after I caught a flier on that second (shot), I was as frustrated as I’ve been in a while on the course just because I didn’t know what I could be doing, what I could be doing any better,” Spieth said. “I’m playing the wind. The wind shoots it one way when it’s supposed to go the other, or the ball is flying a little shorter or further than expected. Just couldn’t quite get it nailed in to the right number.”

Spieth did crack a smile when discussing the chip-in on No. 3, as he and caddie Michael Greller have a season-long side bet on the number of shots Spieth can hole from off the green.

“It’s 13 now, which is right on the over/under between me and Mike,” he said. “Which means anything from now is a win. I got it.”