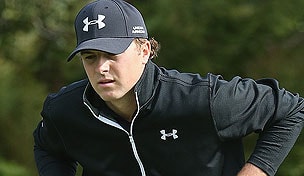 Kapalua, Torrey Pines and Pebble Beach. Three times in 2014 Jordan Spieth has held at least a share of the lead heading into a weekend round, but after the 20-year-old struggled mightily Saturday it appears all three opportunities will end with Spieth outside the winner's circle.

Entering the third round of the AT&T Pebble Beach National Pro-Am tied atop the leaderboard with Jimmy Walker, Spieth faced the toughest of the three courses in this week's rotation amid the week's most difficult conditions. While Walker made the most of his crack at easier Monterey Peninsula, Spieth stumbled out of the gates at Pebble Beach, making just one birdie en route to an outward nine of 4-over 40 that caused his name to plummet down the standings.

The back nine didn't prove any easier for the Texan, as a birdie on the 15th hole merely brought him back to 5 over for the round, 4 under for the week and within nine shots of Walker. When play was halted Saturday because of darkness, Spieth faced a 5-foot putt to save par on the 16th hole.

While Spieth remains one of the hottest players on Tour, his relative struggles on the weekend this year have dampered what has been an otherwise strong follow-up to a 2013 campaign that netted him Rookie of the Year honors. He co-led the Hyundai Tournament of Champions through 54 holes but ultimately finished second behind Zach Johnson, and three weeks later held the lead at the midway point of the Farmers Insurance Open. Spieth was just one shot back entereing the final round at Torrey Pines but fell back into a tie for 19th after a disappointing 75 on Sunday.

Spieth was not the only player to struggle Saturday at Pebble, where the scoring average was three full shots over par amid blustery winds, and despite the difficult day he will wake up Sunday morning in a tie for 11th. Still, barring a final-round comeback this week may be viewed as another instance in which the rising star put himself in position, but ultimately failed to capitalize.