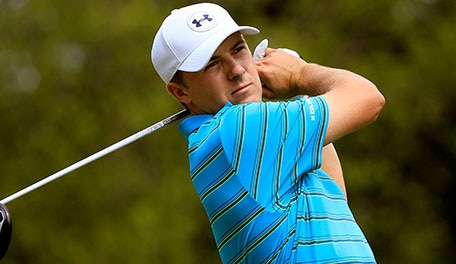 AKRON, Ohio – When we last saw Jordan Spieth, he was left to rue a misguided wedge on the final hole of the Open Championshi

Spieth opened the WGC-Bridgestone Invitational with an even-par 70 that left him five shots behind Danny Lee, but after the round he was shaking his head over a pair of errant approaches from close range.

Spieth is making his second appearance in this event, and now has yet to break par in five cracks at Firestone Country Club. His opener included just two birdies against a pair of bogeys, although he did close with a birdie on No. 18 to make the effort a little easier to stomach.

“Making birdie to shoot even feels better than making bogey to shoot 1 under,” he said. “That’s just the way it works.”

Spieth played an 18-hole practice round on Tuesday, but opted against playing the course Wednesday. Like many players, he was surprised with the firmness of some of the greens on the South Course in the opening round and was left guessing on how several of his approach shots would react once they landed.

“A bit of a lack of preparation, I guess, from my part,” he said. “I could have played nine holes yesterday, but I’m trying to save some rest.”