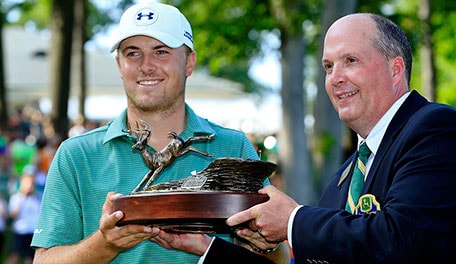 SHEBOYGAN, Wis. – Debates raged over whether or not Jordan Spieth should play in the John Deere Classic ahead of the Open Championship. And then Spieth won the Deere and almost won the Open, which would have been his third consecutive major triumph.

Such discourse won’t take place next year, and it has nothing to do with Spieth’s performance in both events.

The John Deere has been moved to August in 2016, at the same time as when golf will be contested in the Rio Olympic Games. Should Spieth qualify for the U.S. team – and that’s a very likely scenario – he will not be back to defend his title in Illinois.

“Certainly disappointing that they're the same week. It's obvious the decision I would make, but at the same time, (the John Deere is) a tournament that's close to my heart and one that I hope to get back to someday, depending upon how the schedules fall,” Spieth said.

Players on both the PGA and European tours will have lots of decisions to make next year. One notable choice to be made will be between the WGC-Bridgestone Invitational and the French Open. The European Tour will not sanction the former in hopes of enticing its best players to the latter.

Judging by world No. 1 Rory McIlroy’s comments, the tour might have to do more.

“It's an awkward one,” McIlroy said. “Next summer is going to be very condensed. We're going to have a lot of big tournaments in a very short space of time.

“I've heard rumors that the French Open is going to count as two tournaments on the European Tour next year for guys that play both tours. They're going to increase the prize fund. Does that mean that the French Open's going to become more attractive to the top players? Probably not. Bridgestone's a great tournament. And whether it's a World Golf Championship or not, they're going to get a very strong field, just because of the golf course and because of the history it has on this side of the pond.

“I don't think you should blame the European Tour or the PGA Tour for this one; it's more of the Olympics has been put into the schedule and everyone's had to accommodate because of it.”