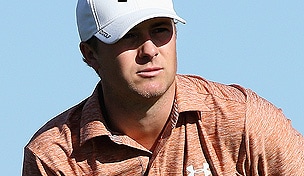 Getty Images
Brandt Snedeker hits his second shot on the second hole during the final round of the AT&T Pebble Beach National Pro-Am at the Pebble Beach Golf Links on February 15, 2015 in Pebble Beach, California. (Photo by Harry How/Getty Images)  -

PEBBLE BEACH, Calif. – Last we saw Jordan Spieth he was closing with rounds of 75 at Torrey Pines with a two-way miss and an ailing right ankle.

On Wednesday at Pebble Beach, Spieth’s first start since finishing tied for 19th at the Farmers Insurance Open, he said both the ankle and his swing are fine.

“I was leaning one way while I was in my follow-through and I just leaned over and kind of twisted it and it just locked up,” said Spieth, who injured his ankle on Friday at Torrey Pines. “(By last weekend) I was back to normal.”

As for the swing, Spieth said he and swing coach Cameron McCormick worked out the issue last week in Dallas.