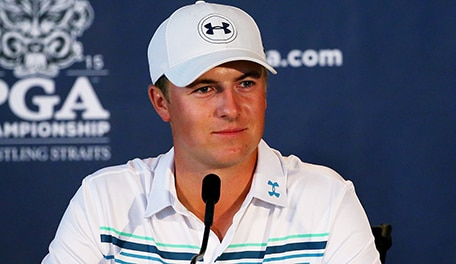 SHEBOYGAN, Wis. – Jordan Spieth is a goal-oriented person. He can accomplish a couple of them this week – one more notable than the other.

Spieth can become world No. 1 for the first time in his career with a victory at the PGA Championship, as long as Rory McIlroy finishes worse than solo second. Spieth can also reach that milestone under a few other scenarios.

Spieth said Wednesday he’s never set time frame for when he wanted to accomplish that goal. He just wanted to get there at some point in his career. Now that he’s this close, he’d assume go ahead and achieve it.

“Given everything that's happened, I believe now that I would like it obviously to be sooner rather than later and then to be able to hold on to it,” Spieth said. “That's a whole other animal as I'm sure Rory knows, Adam Scott knows, Luke Donald knows. There's Tiger (Woods), these guys that are in this field – Martin Kaymer, there's Vijay (Singh), there's a number of them that understand what it's like. I don't know what that feels like yet. That will be a new goal, if I can accomplish the one prior at some point in my career.”

Another stated Spieth goal seems almost a formality this week. He said early this year that he wanted to make the cut in all four majors – something he had never previously done – and have a chance to win at least one.

Well, he’s won two majors this year, so check. As for making the cut in all four …

“I still haven't accomplished that goal set at the beginning of the year that I said I wanted to make the cut in all the majors,” Spieth said. “And (I) wanted to contend and have a chance to win at least one of them. Certainly they have gone according to plan up to this point, but that first part of that goal has yet to be accomplished so I got some work to do these first two days and from there we'll adjust and work our butts off to try and get a third major this year, which would be a pretty cool place in history to be a part of.”

For the record, Spieth has missed the cut in both of his previous two PGA appearances.