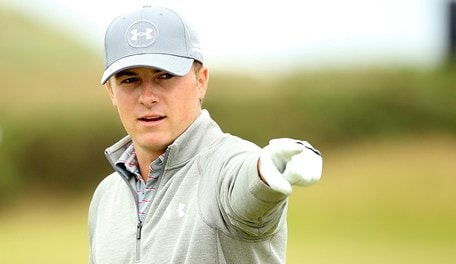 ST. ANDREWS, Scotland – Major championships. We’ve always been told they are different than other tournaments. Save your birdies for the Bob Hope; they aren’t necessary at the Open Championship, U.S. Open, PGA Championship, or even the Masters. Pars are what matter, and great par saves matter most. Red is out, and for four weeks a year, black is in.

Since avoiding bogeys is thought to be paramount in winning majors, only the strongest mentally win majors. Golf’s most strenuous tests are meant to be survived, not mastered. Strategy triumphs, conservatism rules, and grinders prevail. Bulldogs win majors, not show poodles.

Indeed, Jordan Spieth possesses those qualities, and they helped him win this season’s first two majors. Pundits point to his extraordinary maturity at age 21. Spieth dislikes the nickname “Golden Child”, as he should. He’s no child. Spieth plays a veteran’s game better than almost every veteran on Tour. And he knows it.

But when you pour over the statistics, a common thread between his victories at the Masters and U.S. Open doesn’t pop off the page. He ranked below average in driving distance and slightly above average in driving accuracy. Greens hit in regulation was a strength of his, finishing in the top five in each. He putted lights out at Augusta National but not so much at Chambers Bay, even though he did rank second in scrambling.

At the Masters, Spieth not only led the field in birdies, he made more than anyone in the 79-year history of that tournament – 28. At the U.S. Open, he tied for the lead in birdies with 18, just three shy of the most by a champion which was Tiger Woods’ 21 in 2000. That’s a remarkable 46 birdies in the first 144 holes of major championships – one birdie every three holes. No one in the game’s history has made more in the year’s first two majors.

The Tour’s best putter has done that by taking advantage of his opportunities. At the Masters, he converted half of his birdie chances on the greens. Half! At the U.S. Open, it was just 33 percent, but still impressive considering the greens at Chambers Bay are nearly twice as large as those at Augusta National.

Now, Spieth has arrived at the Old Course on the brink of history. Sure, the layout can favor long hitters – just like Augusta National and Chambers Bay were supposed to. Still, there’s one stat the last three Open champions at St. Andrews have in common. The trio led their fields in birdies those weeks. Woods had 22 in 2000 and 21 in 2005. Louis Oosthuizen made 20 in 2010.

To become the first player ever to win the year’s first three professional majors (Note: the Open Championship was contested after the PGA Championship in 1953), Spieth needs to both master the intricacies of the Old Course and keep doing what he’s been doing.

And that speaks to Spieth’s true power. With six worldwide victories in the last eight months and two on the trot, the golf world has been trying to pinpoint why Spieth is so good. There’s no long ball, no brute strength, no flash, no celebrity.

It’s simple though. Spieth has brought the scorecard and pencil back into the game, and with that, a chance to accomplish a feat that would be anything but par.