Stats don't lie: Woods off to worst start of career 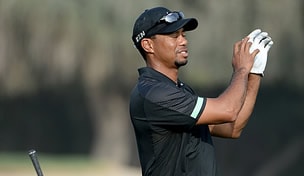 Tiger Woods may say publicly that he’s only a “fraction” off with his game, but this much is clear: He’s off to his worst-ever start as a pro.

In back-to-back starts this year, Woods missed the 54-hole cut at Torrey Pines (finished 80th) and then needed to rally with three late birdies just to finish 41st at the Dubai Desert Classic, where he shot only one round in the 60s and finished 10 shots behind winner Stephen Gallacher.

Whether the product of offseason inactivity, swing issues or competitive rust, this marks the first time that Woods, 38, has started a campaign with consecutive finishes outside the top 20.

Think about this: Woods is in the midst of his 18th full season on the PGA Tour. In nine of those seasons, Woods has won one of his first two starts. On three occasions (2000, 2006, 2008), he won both of those opening starts.

The world No. 1 has been such a fast starter, in fact, that this is just the second time (2011) that he failed to record at least a top-10 finish in one of his first two starts in a calendar year.

HERE ARE HIS FOUR WORST STARTS TO A SEASON AS A PRO:

2014: T80-T41. Woods likely won’t tee it up again until the Honda Classic, near his Jupiter, Fla., home. From there, he will defend titles at Doral and Bay Hill before looking to slip into his fifth green jacket, and first since 2005. Season victory total: TBD

2011: T44-T20. Coming off a winless campaign in 2010, Woods closed with 74-75 at Torrey Pines to post what was (until last week) his worst finish at the San Diego muni. A week later, he flew to Dubai and played reasonably well, save for a closing 75. Season victory total: 0.

2002: T10-T12. Woods failed to seriously contend in his first two starts of the year, but he went on to win five times, including at the year’s first two majors. Season victory total: 5.

2009: T17-T9. In his first start following 2008 knee surgery, Woods was eliminated in the second round of the Match Play, then tied for ninth at Doral. He won his third start, at Bay Hill. Season victory total: 6.

AND HOW HE HAS STARTED EACH YEAR (note: includes European Tour starts):