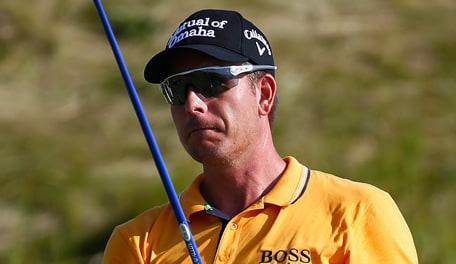 SHEBOYGAN, Wis. – Henrik Stenson joked that he had already researched and booked a flight from Chicago to Copenhagen on Friday night.

He can cancel the ticket and get the airline credit.

One of the pre-tournament favorites, Stenson stumbled to a 4-over 76 in the first round of the PGA, a frustrating score considering he didn’t think that he had played that poorly.

In a spot where he needed to make birdies – lots of them – to make the cut, Stenson was 8 under par with three holes to play Friday before dropping two shots coming home. Still, the 6-under 66 not only kept him around for the weekend, but it vaulted him up the leaderboard. At 2-under 142, he is within five shots of the clubhouse lead at Whistling Straits.

“If you’re not scoring the way you should on a tough day, it just turned into a bad round and I didn’t play that bad,” he said. “At least it was good to get the score right today.”

Stenson is coming off a T-6 at Firestone, his second top-10 in his last three worldwide starts. He has finished in the top 6 in four of his last five PGA appearances.

“I had a chance to bring it home in probably 8 under, which would have been fabulous, but 6 under is still a good score,” Stenson said, “and at least it put me back in the tournament somewhat.”