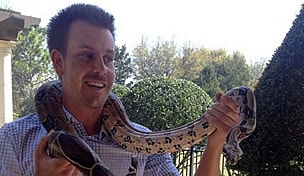 Getty Images
PONTE VEDRA BEACH, FL - MAY 14: Jason Dufner of the United States plays his shot from the third tee during the third round of THE PLAYERS Championship at the Stadium course at TPC Sawgrass on May 14, 2016 in Ponte Vedra Beach, Florida. (Photo by Richard Heathcote/Getty Images)  -

ORLANDO, Fla. – Bounce houses are a bit too boring for Henrik Stenson.

For his son’s fourth birthday party last week, he invited a traveling crew of creatures to his house, which already features a bald eagle’s nest in the backyard.

For the party there was a parrot, lizard and boa constrictor. Oh, and there was a small alligator, too – one, Stenson said, that was “potty trained” and able to go “wee-wee” in the bushes.

“That was a new one for me,” he said, laughing. “Maybe I can sell tickets to next year’s birthday party.”

Stenson’s walk on the wild side began when he perused a few websites, searching for an animal-themed party. He stumbled upon the C.A.R.E. Foundation in nearby Apopka, a non-profit organization that provides permanent homes for endangered animals.

About 15 kids attended the party, as did their anxious moms, including fellow Swede and Orlando resident Annika Sorenstam.

“I was probably the one with the biggest (smile),” he said. “Probably because I was the only one the snake couldn’t eat.”

Thx to the animal lover @henrikstenson and his family for a great birthday party for Kalle pic.twitter.com/pIyUJncw4D