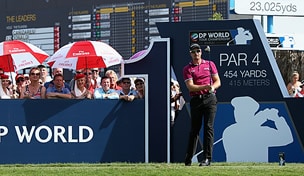 After ending his round with an unexpected bogey Thursday, Henrik Stenson bounced back emphatically in Friday's second round at the Jumeirah Golf Estates to grab the lead at the DP World Tour Championship. Here's how things look after two rounds in Dubai, where Stenson holds a one-shot advantage as he closes in on the season-long crown:

What it means: Two months after winning the FedEx Cup, Stenson appears headed for another season-long title in Dubai after taking the lead from Canizares Friday. The duo have somewhat separated themselves from the field and will play together on Saturday, although the contenders still in the mix include Rose and Poulter, both with realistic shots of winning the Race to Dubai should they catch and overtake Stenson, and Dubuisson, last week’s winner in Turkey.

Round of the day: Already in position to keep his Race to Dubai challengers at bay, Stenson got one hand on the season-long trophy after a flawless 8-under 64. Stenson never went more than three holes without recording a birdie Friday, notching four red figures on each side, and capping his round with a wedge approach to the par-5 18th that spun back to within a few feet of the hole to give him sole possession of the lead.

Best of the rest: After stumbling to a 3-over 75 in the opening round, Ross Fisher rebounded impressively with an 8-under 64 Friday. The Englishman notched a pair of eagles at Nos. 7 and 18, adding four more birdies across his card without dropping a shot. The round was in stark contrast to his opener Thursday, which featured only a single birdie, and allowed Fisher’s name to vault up the leaderboard. At 5-under 139, the veteran sits seven shots off the pace heading into the weekend.

Biggest disappointment: Jamie Donaldson began the week as one of the nine players who could mathematically win the Race to Dubai title, and furthered his cause with a 4-under 68 Thursday. His second-round 72, though, likely ended whatever slim chances the Welshman had of claiming the season-long title. Donaldson suffered three bogeys on his outward nine, then mustered just two birdies across his final 10 holes. Still at 4 under for the week, he now sits in the middle of the pack and trails the leader by eight shots.

Main storyline heading into Saturday: Stenson will once again play in the day’s final pairing Saturday, and rightfully so. The Swede appears at the top of his game, with Thursday’s three-putt bogey on No. 18 his only dropped shot through 36 holes. Though contenders like Rose and Poulter remain within striking distance, it feels like both trophies up for grabs this week are now Stenson’s to lose.

Shot of the day: After finding a water hazard fronting the green of the par-5 18th, Kiradech Aphibarnrat was left with an awkward chip for his fourth shot, one in which he took his stance on rocks inside the hazard. The young Thai played the shot expertly, though, and watched it trickle into the hole to the delight of the greenside crowds. A potential bogey was turned into a closing birdie, and Aphibarnrat is now tied for fifth through 36 holes, five behind Stenson.