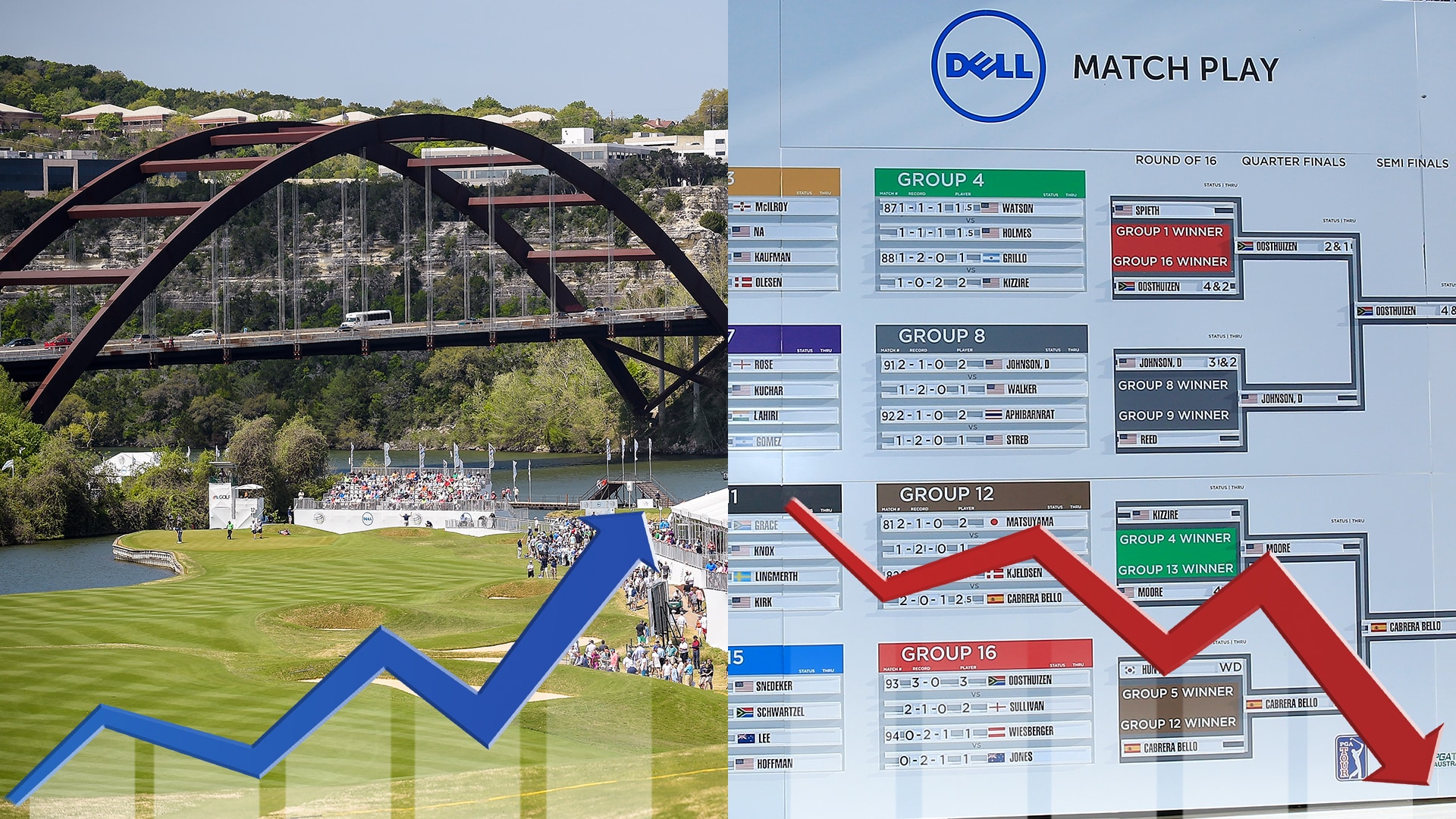 J-Day (+8%): For five days in Texas, he dazzled with rocket-launcher drives and a deft touch on and around the greens while competing with supreme confidence. If he plays like that at Augusta, he’ll win in a rout.

Louis Oosthuizen (+5%): That’s five consecutive top-15s worldwide for the sweet-swinging South African, and the best news is that his ailing back feels better than it has in years. A Masters sleeper no longer.

Austin CC (+4%): It’d be a nightmare for stroke play with the steady breeze and dramatic green complexes, but the new Match Play venue was a blast, with treacherous par 3s, reachable par 4s and watery par 5s.

Lydia-Inbee rivalry (+3%): They finished 1-2 on the leaderboard for the first time this year … just in time for the LPGA’s first major.

Tony Finau (+2%): One of the Tour’s biggest home-run hitters (and nicest guys) picked up his first W at the opposite-field event in Puerto Rico. The victory doesn’t come with a Masters invite, but for whatever reason this event has helped launch the careers of Jordan Spieth and Emiliano Grillo in recent years. With his talent and athleticism, Finau should follow suit.

Ryder Cup/Match Play correlation (-1%): Eleven Americans reached the round of 16 – the most since 2002 – but none reached the semifinals. Any cause for concern? Um, only if you believe that something that happens in March has any bearing on the fall.

Rory vs. Rickie (-2%): Alas, their head-to-head showdown in Michigan was scrapped after organizers couldn’t reach an agreement. It’d be a shame if that Day-Rory semifinal was the only time this year that a few of golf’s biggest stars duel mano-a-mano.

Social-media minefield (-3%): Ah, ’tis the season for "sourced" reports, unsubstantiated rumors and wild speculation regarding Tiger’s status at Augusta. Be careful out there.

Daniel Berger (-4%): And you thought his worst decision last week was forcing a Hall of Famer to tap in a 10-inch putt. Trying to stay alive in his match against Phil Mickelson, Berger hit a rock wall on his downswing, injured his left wrist and withdrew before the third round with the Masters less than two weeks away. Oy.

Match Play (-6%): Sure, Year 2 was an improvement, but that’s not saying much after its unpopular relaunch. There is still no flow to the week, too much golf to follow (112 matches!), too many scenarios to consider and too many meaningless matches. It’s unnecessarily complicated.