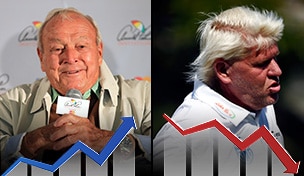 Getty Images
PONTE VEDRA BEACH, FL - MAY 11: Rory McIlroy of Northern Ireland talks to members of the media during a practice round for THE PLAYERS Championship on The Stadium Course at TPC Sawgrass on May 11, 2016 in Ponte Vedra Beach, Florida. (Photo by Mike Ehrmann/Getty Images)  -

Bay Hill (+8%): It serves not only as our yearly “thank you” to one of the game’s legends, but Arnie’s event is must-see TV because it’s also the last chance for the No. 1 player in the world – yes, Tiger, that’s still you – to show he’s major-ready.

Kevin Na (+6%): Sure, he’s painfully slow at times, but the guy has guts, shaking off both the slow-play talk in Tampa and also a rocky front nine to nearly steal the title. Respect.

Juli Inkster (+5%): Losers in the last two Solheim Cups, the U.S. team in 2015 will be guided by the most decorated American player in event history. ’Twas a no-brainer choice – the proud champion oozes passion.

Luke Donald (+4%): Guess who is trending upward just in time for major season? The former world No. 1 who revamped his long game for a shot at the Big Ones.

Sendo (+3%): One of the game’s best ball-strikers summoned nine holes of short-game magic to notch his first Tour title in nearly eight years. That old adage “drive for show, putt for dough” isn’t dead yet, no matter what the stat geeks say.

J-Day (-2%): Talk about terrible timing, as his ailing thumb will force him to sit out another pre-Masters start. The world No. 4’s recent form was phenomenal, and he has top-3s in two of his past three trips to Augusta, but suddenly we’re not so bullish on his major prospects.

Robert Garrigus (-4%): Peculiar week for one of golf’s most entertaining characters: He eschewed practice rounds for afternoon fishing. He heard his caddie rip Na for slow play. And then he kicked away a fourth 54-hole lead, remaining 0-for-his-career.

Florida swing (-5%): The first three legs have been historically brutal. Come to the Sunshine State, and you can get a nice tan and even a few lacerations!

Sneds (-6%): A two-time winner in 2013, he didn’t break par all four days at Innisbrook and now has failed to finish better than 55th (!) in a full-field stroke-play event this season.

J-Daly (-10%): That thud you heard? Oh, that’s just Long John’s PGA Tour career hitting rock bottom. Fortunately for this also-ran, he is only 25 months away from joining the over-50 circuit.