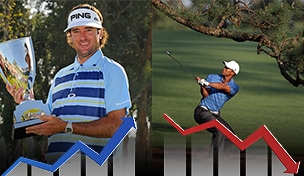 Bubba (+8%): Yes, we could do without all of the petulance, but there’s no mistaking that when properly motivated this left-hander is the game’s preeminent shot-maker. Now, Watson has to be on everyone’s short list of Masters favorites.

Match Play Wednesday (+7%): Thirty-two matchups with 64 of the world’s greatest players – it’s one of the best golf days of the year. This is not one of the best weeks of the year, of course, because by Thursday afternoon many of the A-listers have already been sent packing.

Jason Allred (+2%): The 33-year-old journeyman was a cool story at Riviera, where he soared from Monday qualifier to T-3 finisher. With a third child on the way, the $388,600 paycheck – more than he had earned in his entire Web.com Tour career – couldn’t have come at a better time for one of our sport’s many good guys.

J-Walk (-1%): The erstwhile hottest player in the game was bound to cool off at some point, and he did Sunday with a lifeless 73 at Riviera that left him with only a top-20 finish. Dude has definitely peaked. (Not.)

Matt Kuchar (-3%): The perma-grin disappeared when he missed his first cut in more than a year. At least that poor form probably means little for this week’s Match Play, where the defending champion will put his 15-3 career record on the line.

Westy (-6%): The former world No. 1 revealed that he is no longer working with Sean Foley, then went out and posted his best result in a full-field event since the Open. That he finished 20th only illustrates how far he has fallen.

Eisenhower Tree (-10%): Go figure: Mother Nature proved a more powerful force than the President of the United States. Here’s guessing that come Masters week, there will be a glorious pine in virtually the same spot on 17.