Stock Watch: DJ gets it done; USGA gets it wrong 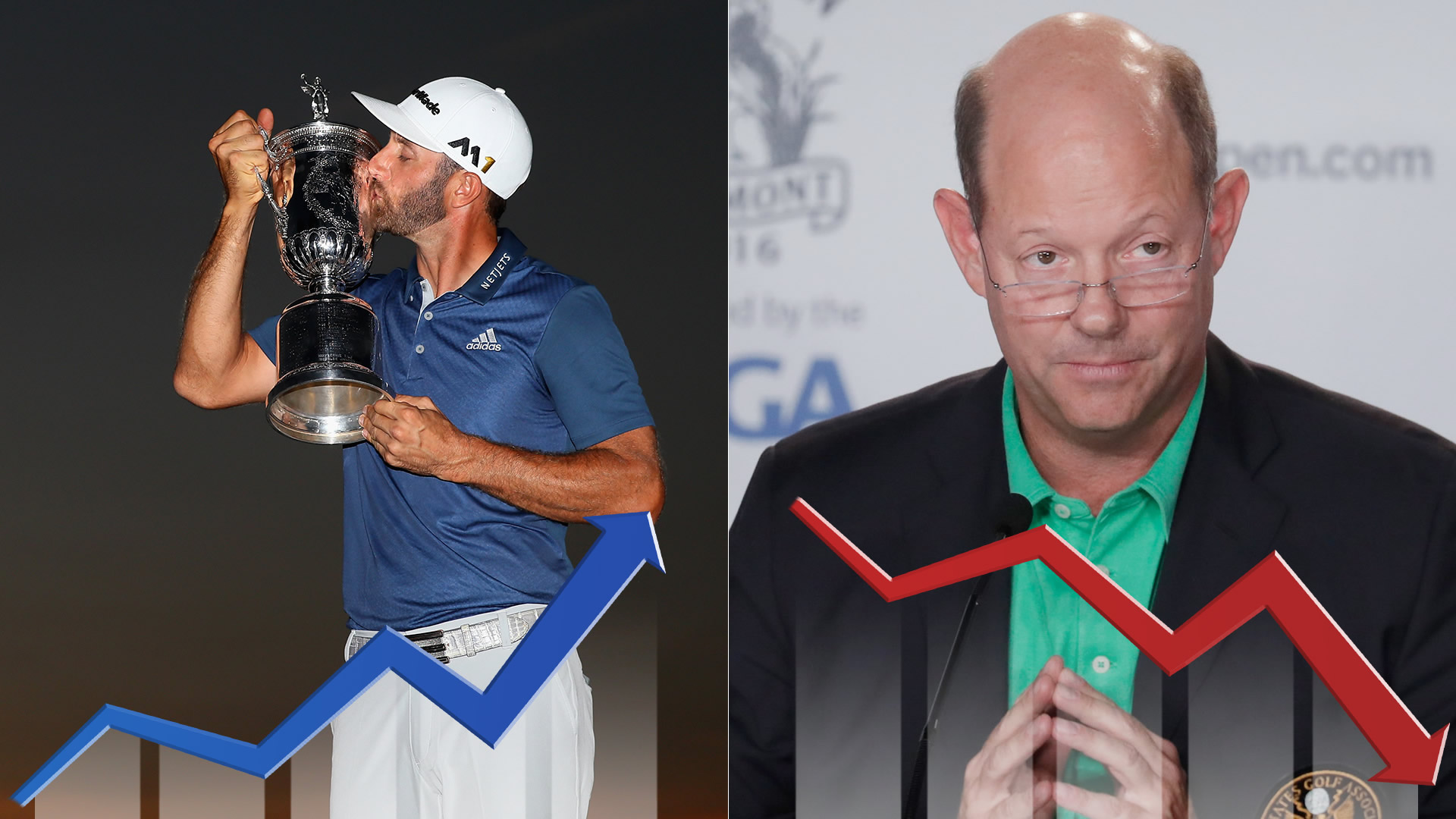 DJ (+9%): That his long-awaited major breakthrough was accompanied by drama, distractions and adversity only made it sweeter. At long last, Johnson will have a positive memory to drawn upon the next time he’s in contention to win a major (which should be very, very soon).

PGA Tour players (+6%): Nothing galvanizes notoriously selfish players like a USGA rules farce. Now that the kid gloves have come off, it’d surprise little if a blue-blazer bashing became the norm at the U.S. Open.

Sergio (+4%): With another high finish at Oakmont, Garcia seems most likely to follow DJ’s lead and shed the label of best player not to win a major, perhaps as soon as Royal Troon.

Lee Westwood (+3%): Yes, he closed with 80 and added another layer of major-championship scar tissue, but he was one of the unsung heroes on Sunday – protecting Johnson and the rest of the field against what he said was not a penalty, then scolding the USGA for interrupting the flow of the final round and causing an unnecessary distraction. Respect.

Jon Rahm (+1%): The only amateur to make the cut at the Oakmont Open, he played solidly the rest of the way for a T-23 finish. This kid is a future top-five player, and his pro career begins this week at the Quicken Loans.

Shane Lowry and Andrew Landry (-1%): How difficult is it to win your first major? The final group combined to strike the ball 154 times on Sunday.

Rory (-2%): His opening 77 at rain-softened Oakmont was the week’s biggest surprise, and then he compounded his mistakes by blowing out of town without talking to the media.

Rickie and Phil (-4%): Pop quiz: Who are the ONLY players in the top 50 who have missed the cut in the Masters, Players and U.S. Open? That’s right, these two.

USGA’s priorities (-7%): So they’re "protecting the integrity of the competition" by pencil-whipping a guy whose ball moved maybe an eighth of an inch, but they continue to promote insane green speeds and have done nothing to stop 400-yard drives. Got it.

USGA’s actions (-10%): After his charges royally botched the Johnson ruling (and then vehemently denied they did anything wrong), Mike Davis, head of the USGA, asked golf fans for a “mulligan” – ironic, of course, because after reviewing all of the convoluted decisions and lawyer-speak in the Rules of Golf … hmm … nope, sorry, it appears mulligans are not allowed. Add a stroke – or 10.