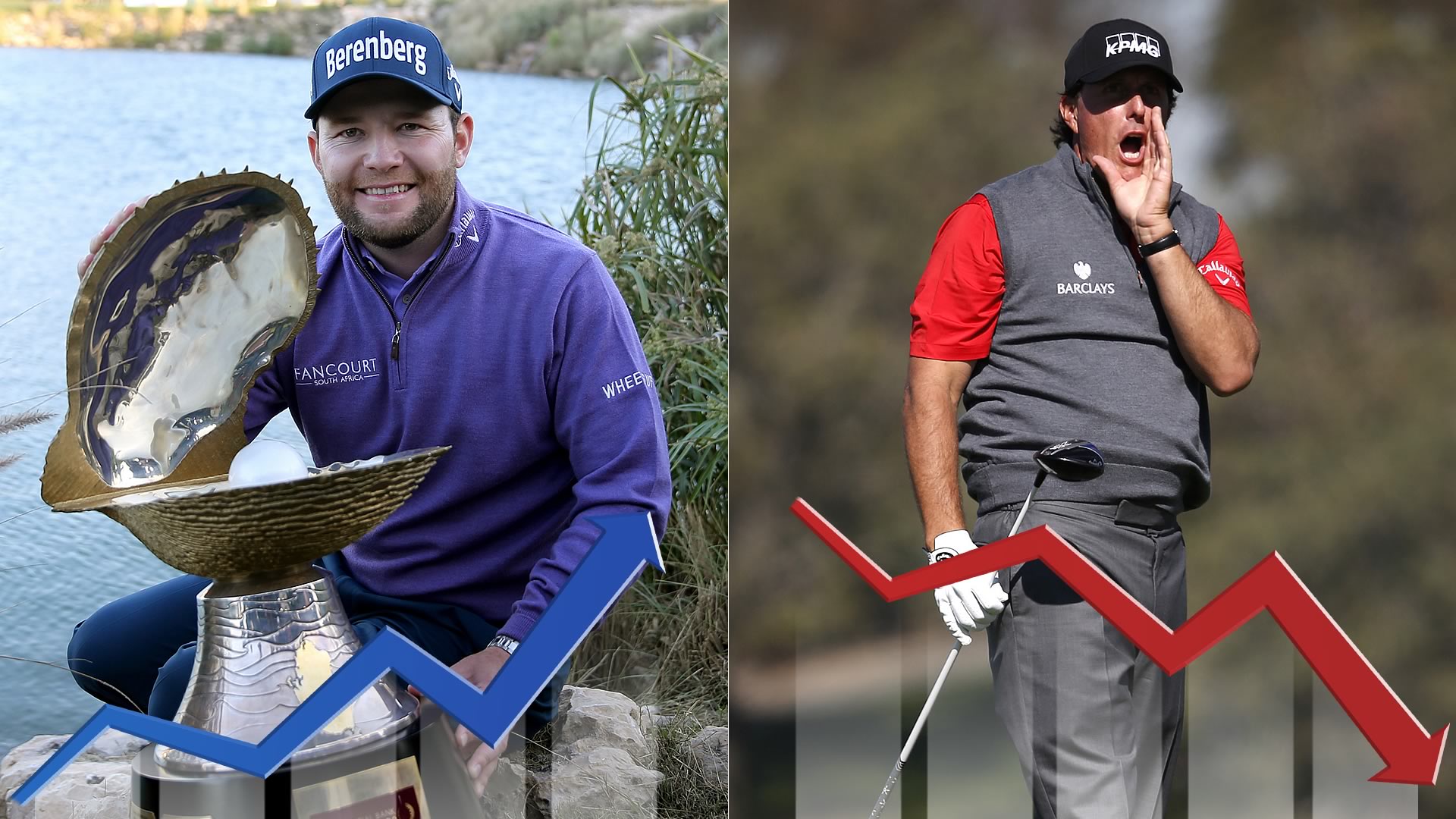 Sneds (+8%): The quality of a pro’s round is usually measured by his score in relation to the field average, but in Snedeker’s case the reaction from his peers was even more telling: How did he do that?! By year’s end, that closing 69 might go down as the round of the year.

Branden Grace (+6%): The South African still lags behind Rickie Fowler, Dustin Johnson, Henrik Stenson and Snedeker for the best-player-without-a-major title, but there’s a sense his time is coming – as long as the 70th hole doesn’t have railroad tracks.

Torrey Pines (+3%): The final round was downright miserable for the 71 players in the field, but for those outside the ropes, that was some of the most entertaining golf we’ll see all year.

Jordan (+2%): Even while running on fumes, Spieth is the only player today who can make an obscure Asian Tour event in the middle of the night must-see TV. The best part? He vowed to never partake in this kind of globetrotting ever again. Smart kid.

Paul Dunne (+1%): It was an auspicious PGA Tour debut for the Irishman, who survived the wicked weather and posted a top-15. More sponsors – including this week’s in Phoenix – are taking notice of his impressive game.

Jason Day and Michelle Wie’s luck (-1%): Day battled the flu all week in San Diego, while the Big Wiesy was treated for a bee sting during a round in the Bahamas. It seems like there’s always some kind of drama with these two stars.

Scott Brown (-3%): Yes, the conditions were brutal for everyone not named Brandt Snedeker, but Brown’s was a historic collapse, going from 54-hole co-leader to a final-round 87 and tie for 49th.

Phil (-4%): His public shaming of a 17-year-old was bad enough, but Mickelson’s 76 on the easier North Course was an absolute head-scratcher, particularly after his encouraging showing in the desert.

DJ (-5%): Another tournament in contention, followed by another maddening weekend fold-job. Johnson hasn’t been the same player since his meltdown at Chambers Bay.

Jim Furyk (-7%): The aging warrior will undergo wrist surgery and miss at least another three months, putting in doubt his appearance at the Masters, his title defense at the Heritage and his chances of making what could be his final U.S. Ryder Cup team. Bummer.